DNA results bring about some closure for Hearn family 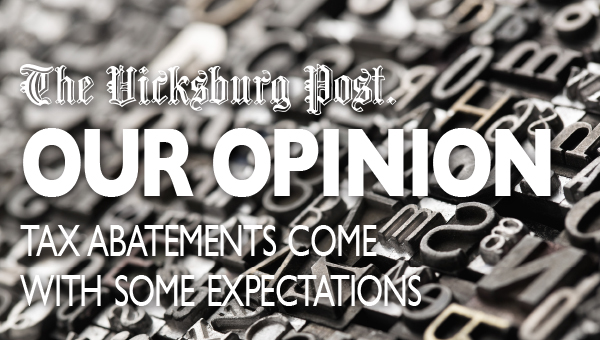 Opinion: Everyone needs to live up to their end of the agreement

It is around this time each year when corporations, businesses, developers and others, seek to have taxes abated for economic development projects, capital investments in current operations and expansions of facilities.

In recent weeks, we have seen the city and the county leadership take slightly different approaches when deciding to approve abatement requests. The city board has approved each abatement, while the county has appeared to take a more thoughtful approach.

Admittedly, this is the first time around the block for many of the supervisors, as four of the five on the board are still less than a year into their first terms. Through their first few months in office, this group has been thoughtful, questioned nearly every decision before them, and taken a detailed approach in making each decision.

These abatements have been no different, and rightfully so.

While we are pro-business and believe tax abatements for corporations and businesses are a necessary economic development tool, there are limits and there should be accountability.

The most recent request to come before both the city and the county involves Cooper Lighting.

Just as the company — which was recently purchased by Signify — had requested an ad valorem tax abatement on more than $1 million in capital investment, it also became public it was cutting hundreds of jobs.

The tax break is not a lot of money in the grand scheme of things — $5,890 for the city and $8,081.61 for the county for the next five years — but there is a precedent that must be set and adhered to.

While abatements are used as economic development and economic recruitment tools, there must be accountability. They must come with stipulations and often do. In many cases, abatements are tied to the number of jobs created and maintained.

Why should a company or business be rewarded for making investments in their operation, when there are hundreds of local jobs lost?

While the city did approve the abatement for Cooper Lighting, the county has delayed its decision to give more thought and attention to the matter. A decision is expected Monday. While we do not know the results of the vote today, we do at least know the vote Monday will not come on a whim or without tremendous consideration.

We remain pro-business and encourage our local officials to put every tool to work in recruiting and developing jobs for those who live in Warren County, but a commitment — a partnership — has two sides to it. If these abatements are given, they must be earned and we hope and expect local leaders to hold everyone to their end of the agreement.