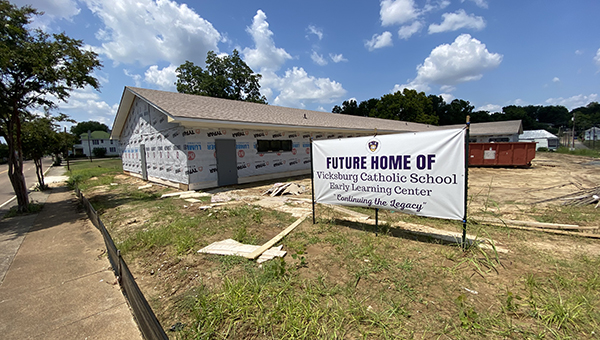 Nearly 160 years ago, six ordained Sisters of Mercy arrived in Vicksburg with a singular goal in mind — to educate the children of the town and open the area’s very first school. Now, that legacy is being continued, and those women are being honored through the naming of the Vicksburg Catholic School Sisters of Mercy Early Learning Center.

The new facility, which is under construction at the corner of Clay and Howard streets, will serve as a childcare center for infants through three-year-olds. The building itself will be named the Sherry J. Scott Building, honoring a graduate of St. Francis Xavier and a generous donor to the school, who learned the importance of giving back at a young age from the Sisters of Mercy.

“Without the support from Sherry and her husband, Sam Scott, fundraising for this project would have been daunting, especially in our current environment,” said Kristi Smith, development director at VCS. “Their generosity and commitment to the school is just another great testament to the incredible impression the Sisters of Mercy left on their students.”

But education wasn’t the only call the Sisters of Mercy answered during their time in Vicksburg. In addition to being remembered as great teachers in the area, the Sisters also became nurses when they encountered numerous sick and injured soldiers during the Civil War. That work led them to take over City Hospital in 1878 and the Vicksburg Street Hospital in 1943, which later became known as Mercy Hospital until it was bought by a corporation in 1991.

“When you talk about the history of Vicksburg, you have to talk about the Sisters of Mercy,” said Mary Margaret Edney, a member of the VCS advisory council. “I can’t think of a more appropriate way for us to honor their legacy and to remember the many sacrifices they made to better our community all those years ago. There are a lot of people who will tell you that they wouldn’t be where they are today if it weren’t for those women.”

Since the news of Scott’s donation, VCS has moved into Phase 2 of its capital campaign to raise $2.2 million for the center. This phase will fund construction completion and furnishings, a total of about $400,000.

The Sisters of Mercy Early Learning Center is scheduled to open in 2021. For more information about enrollment, please contact the school at 601-636-4824.