Vikings pull away from Gators in second half to… 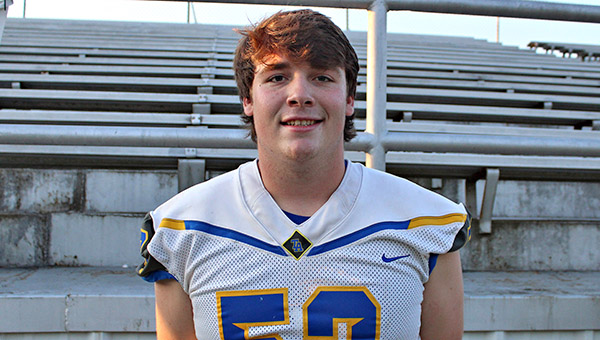 Tallulah Academy’s Marsh Wood caught a 30-yard touchdown pass, his second of the season, in a 22-12 win over Delta Streets Academy on Saturday.

Tallulah Academy was not at its best on Saturday night, and did a lot of things wrong on top of that.

It took an opponent lightly because of a blowout win against them last season. It let up after taking an early lead. It struggled to put points on the board and was sluggish coming off of a bye week.

It was the kind of ugly performance that put a smile on coach Bart Wood’s face.

The Trojans managed to overcome all of those missteps and beat Delta Streets Academy, 22-12. Although far from their best game, it was one Wood said he was happy to have and learn from early in the season as they chase the program’s fourth MAIS eight-man football championship in six years.

Tallulah (2-0) stopped Delta Streets (2-1) on downs on the game’s opening possession, and Walker Sullivan scored on a 20-yard run on the Trojans’ first play. Everything after that was a struggle for them.

Delta Streets kept Tallulah’s high-powered offense — which had scored 58 points against them in 2019 — off the scoreboard for the rest of the half, and tied the game with a long touchdown run by Jaylen Lewis late in the second quarter to tie the game at 6.

Tallulah pulled ahead with two touchdowns in the second half. Marsh Wood caught a 30-yard touchdown pass from Dee Morgan, and Paul Michael Machen had a touchdown run, but the Trojans never quite put the game on ice.

Even at the end, Delta Streets threw a scare into the Trojans. While trying to run out the clock with about a minute to go, Morgan threw an interception inside the 5-yard line. Jimmy Gibbs returned it nearly the length of the field before he was tackled inside the Tallulah 5-yard line, and Lewis caught a touchdown pass to cut it to 22-12.

The two-point conversion was no good, however, and Tallulah was able to run out the clock.

“We needed to stop them. We didn’t want it to be a one-score game and give them a chance,” Wood said. “We fought through it, and we won it, and I’m proud of these boys.”

Saturday’s game was the second that Tallulah has played at Porter’s Chapel Academy’s field in Vicksburg, since Louisiana’s current COVID-19 restrictions prohibit it from playing in its home state.

Wood said he was hopeful those restrictions would be eased in the coming week. If they are, the Trojans will go to Haynesville, La., on Friday night to play Claiborne Academy. If they are not, then Tallulah and Claiborne will play next Saturday at 7 p.m. at Adams County Christian School in Natchez.