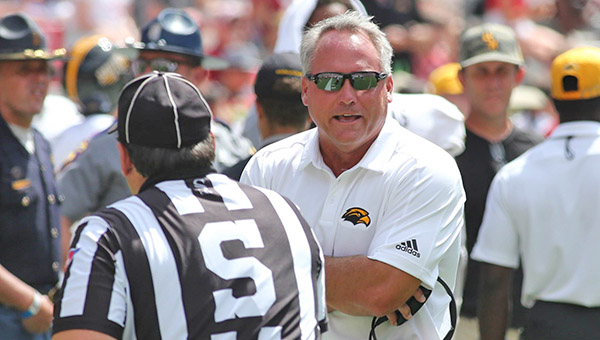 When he was hired as Southern Miss’ head coach four years ago, Jay Hopson called it “a dream job.”

The dream is over.

In a statement announcing the change, Southern Miss athletic director Jeremy McClain said Hopson approached him after Thursday’s 32-21 loss to South Alabama to discuss the status of the program. In the statement, both McClain and Hopson described it as a mutual decision for Hopson to step down.

No press conference was planned for Monday with Hopson, McClain or Walden, a spokesman for Southern Miss’ athletics department said.

“After heartfelt discussion with Jeremy, we have come to a mutual agreement for me to step down as head coach. I am in total agreement with this change in leadership and truly believe it is in the best interest of the players, coaches and this entire program,” Hopson said. “I cannot thank Dr. Bennett and our administration enough for the opportunity that they gave me. I wish Southern Miss nothing but the best and am thankful for all that they have done for me and my family.”

Hopson, a Vicksburg native and Warren Central graduate, was 28-23 in four seasons and one game as Southern Miss’ head coach. He led the Golden Eagles to three bowl games, including last season.

Hopson also was an assistant at Southern Miss from 2001-03, and again from 2005-07 — two of many stops in a 26-year coaching career. Prior to being hired at Southern Miss, he was the head coach at Alcorn State from 2012-15 and won two Southwestern Athletic Conference championships.

“There are dream jobs in people’s coaching careers, and this was certainly a dream job of mine,” Hopson said when he was hired by Southern Miss in February 2016.

Hopson was fairly successful at Southern Miss — he had a winning record in all four seasons at the helm — but not enough to fully satisfy its fan base. His best season was in 2017, when the Golden Eagles finished 8-5. They lost in their last two bowl trips and did not win the Conference USA West Division under Hopson.

“Coach Hopson came to me after last Thursday’s game to discuss what was on his heart and after much discussion over the weekend, he and I agreed that new leadership for our football program is needed,” McClain said. “Coach Hopson has been a part of our program for 10 years. I appreciate his commitment to Southern Miss and wish Jay and his family nothing but the best.”

With a full season ahead, Walden will try to pull Southern Miss out of a low point.

He is in his fourth season at Southern Miss, and has worked as the co-offensive coordinator and wide receivers coach before receiving the promotion to interim head coach.

Prior to coming to Southern Miss, Walden spent one season at the head coach at Division III East Texas Baptist. ETBU finished 7-3 that season and led the country in scoring offense at 49.9 points per game.