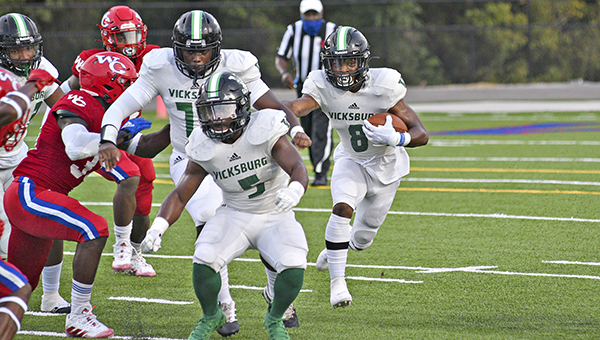 The evolution of Vicksburg High’s football game against Biloxi might be a more fascinating tale than anything that happens on the field.

It is, all at once, a simple story of two lonely teams needing a partner. Once they found each other, forces beyond their control conspired to keep them apart. They’ve switched venues a half-dozen times and survived a scare from COVID-19, all on the way to their first meeting in 43 years this Friday night on the Coast.

“We have three new opponents on the schedule, so it was not just with them,” said Vicksburg coach Todd McDaniel, who has had to make a half-dozen adjustments to his schedule because of the COVID-19 pandemic. “This whole 2020 has been about being flexible. It’s been a year of adjustments.”

Vicksburg was originally supposed to travel to Benton (La.) this Friday, in the second half of a two-year home-and-home series. Biloxi was slated to play Hammond (La.). Both games were canceled in late July, however, because the Louisiana teams were unable to play because of COVID-19 restrictions that delayed the start of the high school football season in that state.

The game, the first between Vicksburg and Biloxi since 1977, was added to the schedule in early August.

“We were both looking for a game and we bumped into each other,” McDaniel said.
Scheduling the game was the easy part. Finding a place to play it was another issue.

Vicksburg is playing its home games across town at Warren Central this season, because of construction at its own stadium. Warren Central has a home game this Friday night, which meant Vicksburg would have had to play on either Thursday or Saturday and Biloxi was not willing to travel on either night.

The next step was to find a neutral site that would also ease some of the travel for both teams. Four different venues — Mississippi College, Jackson’s Memorial Stadium, Jones College and Hinds Community College — were approached about hosting the game, but all of them fell through. Memorial Stadium was unavailable because other high school teams are using it, and the college stadiums are not permitting anyone other than their own teams to use their facilities because of COVID-19 concerns.

In the end, it was decided that Vicksburg would simply travel to Biloxi to play the game.

“By the time we loaded up and traveled to one of those places, we figured we might as well just go to Biloxi,” McDaniel said. “We mainly wanted to get the kids on the field and play.”

The final turn in the game’s evolution came in late August when Biloxi had to suspend practice because of a COVID-19 outbreak. No football players tested positive for the virus, but 15 students in the Biloxi Public School District did, and more than 300 students were quarantined. Biloxi Public Schools also suspended in-person instruction until this week.

Biloxi canceled a preseason scrimmage and a regular-season game against Poplarville because of the outbreak, and will play its first game of 2020 this Friday against the Gators.

“I asked (last) Friday night and they never said they weren’t going to play unless they were out of school,” McDaniel said.

The two months of twists and turns will finally end when the Gators and Indians take the field Friday at 7 p.m. For Vicksburg, it is a chance to bounce back from a 17-0 loss to Warren Central in last week’s opener and build on a performance that McDaniel was fairly pleased with.

Although they did not score any points, McDaniel said he was pleased with the way the Gators played. The defense held Warren Central in check most of the night, while the offense did not commit any turnovers. Vicksburg committed three penalties, two of which helped lead to points for Warren Central, but on the whole played a clean game, McDaniel said.

“I was really happy with our effort. I was not happy with the loss,” he said. “We were able to clean up the game. We did not have any bad plays on special teams, or busted coverages on defense. We were a couple of power steps away from putting 14 or 20 points on the board and maybe winning the game. We played a sound football game. It’s the game we have to get accustomed to. We’re not going to beat ourselves.”