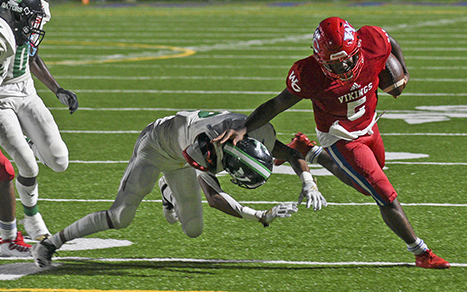 A lot of work has gone into renovating and modernizing Warren Central’s 50-year-old Viking Stadium over the past couple of years. Artificial turf was laid down in 2019. This summer, chairback seats, new bleachers, a ninth-grade fieldhouse and a huge video scoreboard were added.

The only thing missing were fans to enjoy it, and they’ll finally be welcomed back in large numbers when Warren Central hosts Brandon on Friday night. As many as 1,600 fans will be in attendance — a sellout crowd under Mississippi’s current COVID-19 restrictions — after only 150 were allowed in for the season opener against Vicksburg last week.

Warren Central coach Josh Morgan said he was excited at the prospect of playing in front of a sizable crowd again.

“Sports thrives off fans. It’s definitely a watered down version without them. We’re excited about having more people there in the stands and we want to make sure we’re putting on a good show,” Morgan said.

Viking Stadium will see plenty of use this season. Seven of Warren Central’s eight games are there, with the only road trip coming on Oct. 30 to Starkville. Two other road games were canceled when opponents opted not to play because of COVID-19 concerns, and the Vicksburg game was moved to WC because of construction at Vicksburg’s Memorial Stadium.

The unusual schedule breakdown will create a season-long homefield advantage that Morgan is eager to take advantage of.

“If we ever get a full crowd in this rascal we’ll sure enough be happy,” Morgan said with a laugh. “It’s kind of a weird year, but we are fortunate enough to have all of our games at home except Starkville. Like we always do, we’ll try to find the edge and use everything we can to benefit us. It’s always good being at home and being comfortable.”

After beating Vicksburg 17-0 in the opener, the Vikings will turn their attention to Brandon (0-1). It’s the first of seven consecutive games against Class 6A opponents, most of them perennial powerhouses.

Brandon has won at least one playoff game in nine of the past 10 seasons and has not had a losing record since 2008.

“We know this is going to be a big-time game. It’ll have a big-game feel to it, and it’ll be exciting to play in it. Especially with us coming up short last year by one point, I think the guys are anxious to get another shot at them,” Morgan said, adding that the Vikings will try to navigate the difficult schedule by not looking ahead. “We’re one game at a time. We’re going to relish the opportunity this week to play a good Brandon team. We want to play better. We want to play a complete game in all phases, for four quarters, and it’s going to take that to beat a team like this.”

Brandon beat Warren Central 10-9 last season, but was routed 30-7 by Clinton in last week’s opener. The Bulldogs committed several turnovers and uncharacteristic mistakes, and were held to 172 yards of total offense. They completed one pass.

It was the kind of ugly performance Morgan said the Vikings cannot rely on to hand Brandon a second straight loss.

“If it could go wrong, it went wrong for Brandon. They had some costly turnovers, fumbled a kickoff, fumbled a punt snap, a lot of stuff like that. Clinton played well, and Brandon did some good things, but Brandon didn’t help themselves any,” Morgan said.

Warren Central also has some things to clean up in the wake of its season opener. It only managed 234 yards of total offense against Vicksburg and led 3-0 at halftime.

The Vikings also had three fumbled snaps between quarterback Kentrick Thompson and center Charles Holmes. Both seniors are returning starters, but switched positions in the offseason. Thompson played running back and Holmes played guard last seaosn. Morgan said the fumbles were troubling, but expected them to lessen as the two players gain experience in their new roles.

“K.T. has played a lot of football, but it was his first true game at quarterback. It was Charles’ first game at center. Those are two big positions. I thought once we settled down, and even as the game went on we got better and settled in. There is a lot to learn from, and if we can fix those mistakes I feel confident in our offense,” Morgan said. “(The snap is) the most important thing offensively. It happens every play. It’s something we have to continue to work on and get it better. We must be better there.”

Overall, however, Morgan said the win over Vicksburg was a good start to the season. The defense pitched a shutout and the offense did enough to take control of the game in the second half. Although there are plenty of things to work on, winning allowed the Vikings to do it with a smile.

“It’s always a good thing when you can correct things as you go along, but you’re still able to win the game, and that’s kind of how it felt,” Morgan said. “We didn’t play to the level that we want to play and to the level that we’ve got to get to in a hurry. There’s a lot to improve upon and a short time to get there, but we were very proud of that win. It’ll be a springboard moving forward.”