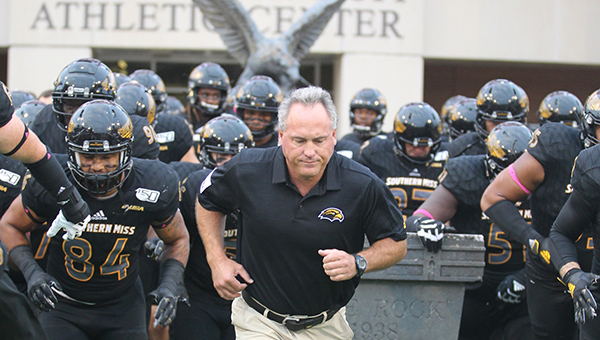 Sports Column: Hopson’s departure was a cruel fact of coaching

It’s a cruel fact of life in the higher levels of college and professional sports that coaches are hired to be fired. Very few get to retire on their own terms.

Mississippi’s college football coaches are being reminded of that on a regular basis these days. Four of them have been fired or resigned in the past year — Southern Miss’ Jay Hopson,

Hopson and athletic director Jeremy McClain met after a season-opening loss to South Alabama and apparently came to a mutual decision that it was best for the program if Hopson stepped down. What exactly led to that decision has not been revealed, and might never be unless Hopson or McClain reveal it. In his first press conference as interim head coach, Scotty Walden said he learned of Hopson’s resignation — and his own promotion — 20 minutes before the players did.

In the absence of facts, or at least a credible explanation, speculation has taken over. Any one of a dozen reasons — from office politics, to a slump in the program’s fortunes, to health issues — have been mentioned, and some or all might have some merit. There has been no indication that any one of them, however, was the driving force behind the decision.

What is known is that Hopson’s time at Southern Miss has come to an end, and it’s a bit of a personal tragedy. Like Luke at Ole Miss, Hopson identified with his school. Three of his dozen-plus coaching jobs had been at Southern Miss, and he considers Hattiesburg his hometown as much as he does Vicksburg. Hopson would have been very happy to have a successful 10- or 15-year run at Southern Miss and retire in the same status as former USM coach Jeff Bower.

Hopson won’t get that chance. In the end, he was just another coach who was on the clock to be fired from the moment he was hired. It’s a shame, but it’s also the cruel business he and his colleagues have chosen.

Ernest Bowker is the sports editor of The Vicksburg Post.