After years of struggling, PCA’s offense breaking out in… 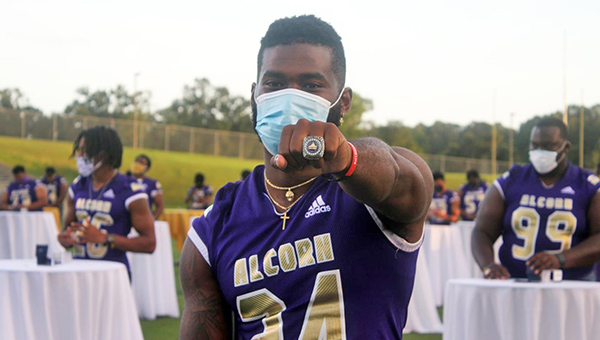 Alcorn State running back Jonathon Bolton shows off the 2019 SWAC championship ring he and his teammates received at a ceremony Tuesday at Jack Spinks-Marino Casem Stadium in Lorman. (Alcorn State Sports Information)

A highlight video from the 2019 season was shown before the Braves received their rings.

“I want to thank everyone who put on this ceremony tonight to honor our football team, especially Dr. Nave, AD Horne and Coach McNair. It’s an honor for us to be recognized, and we as a team are very appreciative of all the support we receive from the athletic staff and administration,” said Pringle, who caught a team-high 48 passes for 828 yards and 14 touchdowns in 2019.

“Last season, our team worked extremely hard to win another championship and we are all very proud to represent Alcorn State University,” Pringle added. “Winning the SWAC championship right here on our field two years in a row was an unbelievable experience, and a moment that we as student-athletes will remember for the rest of our lives.”

The Braves won their second consecutive SWAC Championship and sixth straight SWAC East Division title last year. It was the 17th conference championship in the program’s history, and the fourth in the last six years.

Alcorn finished with a 9-4 record, and beat Southern University 39-24 in the SWAC championship game.

The Braves also played in their third Celebration Bowl — they lost 64-44 to North Carolina A&T — and finished the season ranked No. 1 in the Football Championship Subdivision in both interceptions and takeaways.

“It was a great 2019 season — the team worked and played hard. This is something that you earn at the end, back-to-back SWAC Championships,” McNair said. “I want to extend a thank you to the fans, the people that sit in the stands every Saturday — rain, shine, sleet, and snow — they’re our biggest supporters, our 12th man.”

Alcorn will carry a 10-game home winning streak, which is the fifth-longest in the FCS, into next season. The SWAC postponed its 2020 season until the spring, so the Braves are scheduled to play their first game on Feb. 27 at Alabama A&M.

“I cannot express how proud we are for the hard work, commitment, and winning the 2019 SWAC Championship,” Nave said. “The team has represented Alcorn State University well by optimizing excellence and they will continue to do so in the coming seasons. We couldn’t predict COVID but the team deserves the hardware for the hard work that took place on the field.”