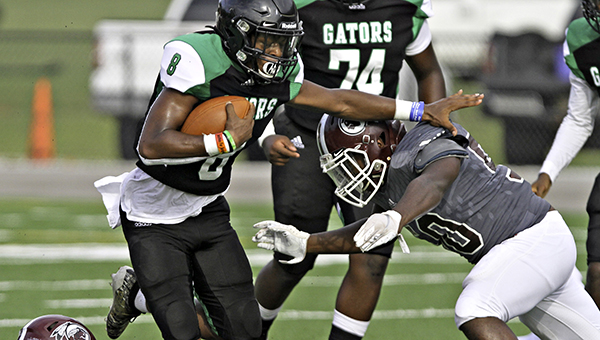 Gators try to get on the scoreboard against Natchez

The first two weeks of the season, to put it mildly, have not gone the way the Vicksburg Gators had hoped.

In two losses to Warren Central and Biloxi, they have yet to score a point. It’s the first time Vicksburg has been shut out in back-to-back games since the last two games of the 1994 season.
Heading into Week 3, this Friday at Natchez, there might be a temptation to shake things up. Head coach Todd McDaniel, however, said it’s way too early to panic.

Beyond their own on-field struggles, there have been some valid reasons behind Vicksburg’s slow start.

Starting quarterback Sha’Kori Regan suffered a hand injury late in training camp and missed the opener against Warren Central. He played with a cast on his left, non-throwing hand, against Biloxi, but was limited. He lost a fumble that was returned for a touchdown.

Laurence Sullivan, normally a receiver, and freshman Ronnie Alexander have played in Regan’s place. McDaniel said Regan’s status for the Natchez game was 50-50.

The Gators’ two opponents have also featured some very good defenses. Warren Central has not allowed a touchdown in its first two games, and Biloxi has several Division I prospects.

“Biloxi was a tough team. They had four defensive linemen with (college) offers. We blocked them well in spots, but we have to find a way to get mentally and physically tough,” McDaniel said. “Those are two good football teams, and it was a good challenge. That showed us the things we need to home in on.”

While there’s no shame in losing to quality opponents, McDaniel did admit the Gators need to find some success this week against Natchez. The Bulldogs have yet to play a full game. Their opener against Wesson ended early because of severe weather, and their second game was canceled when their opponent Magee had to quarantine a number of players because one tested positive for COVID-19.

“They’re in a situation where they’re starting over from scratch, just like we are,” McDaniel said.

McDaniel added that the Gators, while still scoreless for the season, have had opportunities to break some big plays and score. A missed block here or running into a wrong hole there have cost them. Correcting those small issues, McDaniel said, was the key to both getting on the scoreboard and into the win column.

“We’re most definitely looking for a taste of success,” McDaniel said. “But we left several points on the field. We have to start doing the little things right. We have to find a way to get on the scoreboard.”

ONLINE
For full coverage on Friday night, visit vicksburgpost.com and follow us at facebook.com/thevicksburgpost and twitter.com/vixpostsports