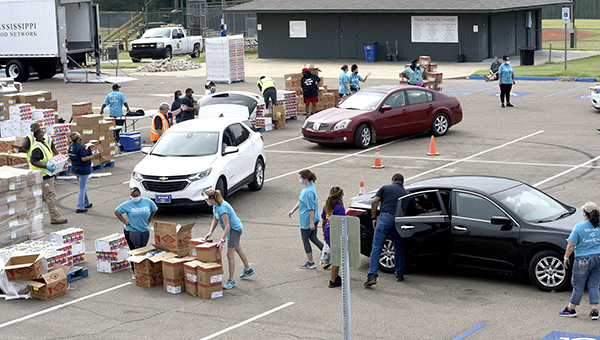 A food giveaway scheduled Friday by Tyson at Halls Ferry Park created long lines and traffic congestion on busy roads in the area. The company said 1,500 to 1,700 cars were served during the event. (Courtland Wells/The Vicksburg Post)

Why couldn’t a number of Vicksburg’s drivers cross the road?

Because the chicken was already on the other side.

A food giveaway sponsored by Tyson Foods’ Vicksburg plant resulted in long lines of traffic early Friday as drivers queued up for chicken products and produce being distributed at Halls Ferry Park.

Allen D. Fulsom, Tyson plant manager, said the company announced it would be giving away 45,000 pounds of the plant’s chicken products with the Mississippi Food Network giving out fresh produce. He estimated 1,500 to 1,700 cars came to the site.

The giveaway was scheduled from 9 a.m. to noon Friday, but cars began lining up early and caused traffic jams in the westbound lane of South Frontage Road and along portions of Halls Ferry Road. At one point, Mayor George Flaggs Jr. was helping police direct traffic on Halls Ferry.

“I take full responsibility for the traffic,” Flaggs said. “That’s why I went out there, to try and assist the police department. We didn’t go out and organize it and it created a traffic jam, but we were able to organize it and get it flowing and it ended up going real good.”

Fulsom said Tyson tries to help the community, adding this was the first time the company reached out to Vicksburg as a city. The company has a processing plant at the CERES Industrial Park in Flowers, about 15 miles east of the city.

“There have been individual local churches and nonprofits that we donated to but nothing to that magnitude,” he said.

“Logistically, that wasn’t managed the best way it could have been,” Fulsom said. “I do know Mayor Flaggs did provide the venue for us. But in the future, we will look for something that allows for through traffic.”

Flaggs said next time, Tyson and the city need to consider area businesses and the impact it could have on their business.

“We want to thank Tyson (for the giveaway),” Flaggs said. “It was very effective and a lot of people got served. I’m pleased with the way it happened. It’s just unfortunate that it (the traffic jam) happened. It was blocking some of the businesses (on Halls Ferry) during a peak business time for them.”