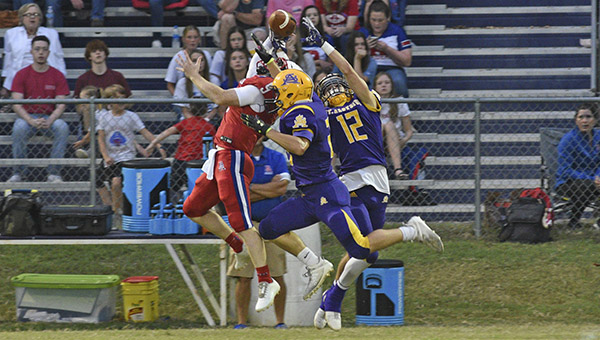 St. Al finds the end zone, but falls to Riverfield

The ball sailed high and deep toward the front corner of the end zone. Carter Magee jumped high to reach it and somehow got a foot down inside the pylon. St. Aloysius’ band struck up its touchdown celebration music and the Flashes on the field erupted in celebration.

The touchdown did not change the outcome of a game that had long been decided. Riverfield Academy, the defending MAIS Class 4A champion, overpowered St. Al after a slow start and won 44-9. The score midway through the fourth quarter was, however, a reward for a St. Al team that has had precious few of them this season.

Magee’s 19-yard TD reception from Tristan Wilbanks was St. Al’s first of the season, and snapped a streak of 15 ½ quarters without one. Despite the offensive struggles, St. Al’s record only fell to 2-3 thanks to a pair of forfeit victories earlier this season.

“I know it sounds redundant, but I keep stressing to them that it’s the process. We’re not looking at the end result,” St. Al coach Stacy Sizemore said. “We’re looking at day to day, play to play, doing the very best we can possibly do on each play and then hopefully we put enough of those together to get a drive and hopefully we put enough together where we score. Tonight, we got a touchdown. They just kept playing hard. Our kids don’t quit and they don’t back down.”

Hudson Brakefield led Riverfield (4-1) with 242 rushing yards and three touchdowns, while quarterback Trent Ginn added 89 yards and two TDs. Riverfield finished with 358 rushing yards as a team and only threw one pass — a deep ball on its first play of the game that was intercepted by St. Al’s Cooper Madison.

The Raiders’ defense held St. Al to 27 yards of total offense — a number slightly deflated by two errant snaps that resulted in total losses of 49 yards — but they did not fully gain control of the game until late in the second quarter. Brakefield and Ginn each finished off scoring drives with touchdowns in the last six minutes to turn a nine-point lead into a comfortable 24-3 margin at halftime.

Before then, St. Al gave Riverfield a fight and even had a chance to take an early lead. Adam Francisco returned the opening kickoff 69 yards to the 12-yard line, but Colton Williams wrestled a jump ball away from Brennan Williams for an interception in the end zone on the first play.

St. Al’s first points finally came when Reed Bourne kicked a 41-yard field goal with 8:02 left in the second quarter. It was Bourne’s second field goal this season from longer than 40 yards.

“We end every practice with field goals, and he’s pretty consistent around that area. I know if we can get inside the 30, we feel like he can make those,” Sizemore said.

Riverfield padded its lead in the third quarter, scoring on runs of 18 yards by Brakefield on the opening drive and 2 yards by Colton Williams with 6:11 left to make it 38-3. A 1-yard run by Addison Shelton stretched it to 44-3 at the end of the period.

“They’ve got a good football team. I give them all the credit in the world,” Sizemore said of Riverfield. “They should be back in the state championship.”

St. Al continued to fight, however, and found the end zone for the first time this season with a couple of big plays. A long pass from Wilbanks to Chase Tucker went for an apparent touchdown but was negated by an illegal block. It still gained 21 yards, and two plays later Magee pulled down Wilbanks’ pass just inside the front corner of the end zone.

Wilbanks was only 6-of-10 passing for 37 yards, but did complete all four of his throws in the second half.

“The first touchdown, it felt good to finally get that out of the way. Hopefully we can keep rolling on that,” Magee said. “I knew we were close to the sideline and I couldn’t run my full route. I tried to stay in. Luckily, I hit the pylon in time.”

Sizemore said he was hopeful the momentum will carry over into next week’s District 3-5A road game at Copiah Academy.

“That’s huge for us. I think that gives our kids something to build off of. We’re looking at small victories,” Sizemore said. “We scored and it gets called back, and we could have laid down right there but we go on in and score again. That shows a lot about our kids that we could have folded right there, but we didn’t. We just kept playing and pushing and driving, and we came up with a touchdown.”