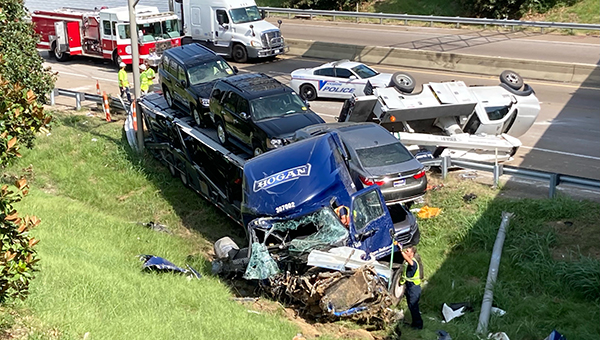 Traffic along Interstate 20, near the bridge, has been shut down to make repairs to interstate signage caused by a Sunday morning wreck involving an 18-wheeler.

An accident involving an 18-wheeler Sunday morning will now cause traffic delays well into Sunday evening.

At around 10:30 a.m. Sunday, an 18-wheeler overturned as it was traveling eastbound on the Interstate 20 bridge. As it struck an unoccupied work truck parked near the foot of the bridge near the Washington Street overpass, the truck also caused significant damage to a sign and its support structure.

Since the accident, Louisiana officials have blocked access to the bridge to those traveling eastbound. At around 3:45 p.m., westbound traffic was blocked to allow equipment and crews to begin work on replacing and repairing the signs’ support structure.

Michael Flood, with the Mississippi Highway Patrol, said the work could last up to six hours.

The repair crews are being supported by the Vicksburg Police Department, the Warren County Sheriff’s Office and the Mississippi Highway Patrol.

Vicksburg Chief of Police Milton Moore said as of right now, no westbound on ramps in Vicksburg will be closed, but he urged residents to avoid traveling on the interstate unless you are heading eastbound for the next few hours.

“We do have Mississippi Highway Patrol assisting us at the onramps to help divert traffic from the interstate,” Moore said. “At this point, we do not anticipate the need to close any onramps.”

Moore said the driver of the truck received minor injuries and was treated and released. The cause of the accident remains under investigation.

Warren County Sheriff Martin Pace said he expects traffic on westbound I-20 to back up well into he county and maybe even further.

“If traffic is shut down for several hours, then it will back up well into the county, well outside the city limits and possibly into Hinds County,” Pace said. “It just depends on the volume of traffic that is flowing.”

The motorcycle unit, Pace said, can navigate in between parked traffic and continue to patrol the area.