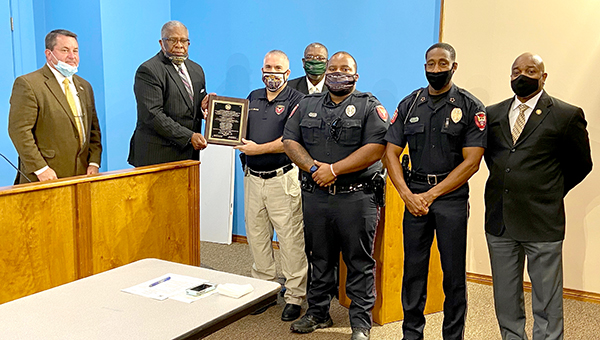 The Board of Mayor and Aldermen on Monday honored members of the Vicksburg Police Department for their work in a Sept. 16 drug bust that resulted in the arrest of one man and the seizure of a large amount of drugs and a cache of weapons.

Twenty pounds of marijuana and 2,700 ecstasy pills were seized, along with three handguns and one rifle and $3,770 in cash and a measuring scale. Police put the street value of the drugs seized at $25,000.

Duane Lamar Williams, 45, who was already on parole for a federal drug-related conviction, was arrested without incident.

“According to Chief (Milton) Moore, in his 21 years this is the biggest bust he’s seen and we want it to not ever go unnoticed that we see the good work you do on the streets of Vicksburg,” Mayor George Flaggs Jr. said. “Everybody likes to talk about the tickets you write but it’s other work that you do to protect and serve us. We want to not let this day go by without recognizing you.”

The drugs, weapons and cash were confiscated shortly after daylight Sept. 16 when officers served a search warrant on the home at 812 Central Ave. The seizures and arrest were the results of an investigation by the department’s Neighborhood Enforcement Team into complaints of drug activity in the neighborhood.

Williams was charged with two counts of aggravated trafficking of narcotics, as well as four counts of possession of a firearm by a convicted felon. Judge Angela Carpenter set Williams’ bond at $275,000 and bound his case over to the grand jury during his initial court appearance on Sept. 17.