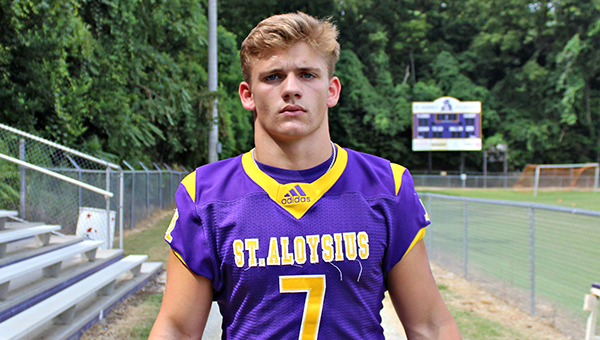 St. Aloysius linebacker Trace Daily had more than 10 tackles and one sack in a 31-0 loss to Copiah Academy on Friday.

The Copiah Academy quarterback ran for more than 150 yards and two touchdowns as the Colonels beat St. Al 31-0 on Friday night.

Copiah (4-2, 2-1 MAIS District 3-5A) crept out to an 18-0 lead by halftime and then cruised home to the victory. St. Al (2-4, 1-1) was shut out for the third time this season, although one of those was reversed to a forfeit victory because an opponent used an ineligible player.

“The score doesn’t indicate how the game was played. I was very proud of our kids for competing the way they did,” St. Al coach Stacy Sizemore said. “We fixed a lot of mistakes and we will continue to get better.”

St. Al will return to Balzli Field next Friday to play Silliman in the second of three consecutive district games.

Baker’s TD pass to Undrea Spencer on the game’s opening drive gave Briarfield an 8-0 lead. The Rebels (4-0, 1-0 MAIS District 3-1A) turned a fumble into another TD, on a pass from Baker to Crews Fortenberry, early in the third quarter to make it 16-0.

Tallulah (3-2, 0-1) got on the board with a 20-yard touchdown pass from Dee Morgan to Marsh Wood, but that was all it could muster.

“I didn’t think we could hold them down to 16 points. We hold them to 16 and we’ve got to win,” Tallulah coach Bart Wood said.

Wood added that, although it was a district loss that will likely come into play later in the season, it was a confidence-builder for his young team.

“We showed that we can play with them,” Wood said. “I’m very proud of our boys. We’ll meet them again.”