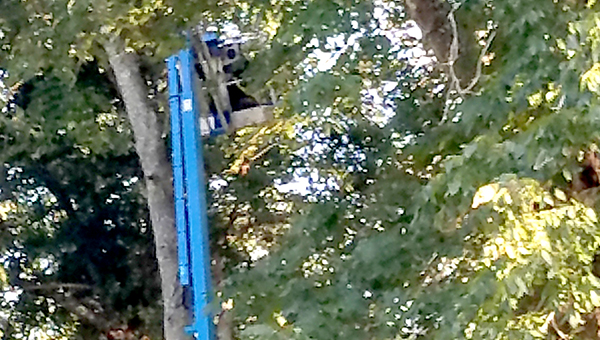 Multiple emergency units responded to the 1100 block of Choctaw Trail Sunday afternoon to rescue a man who had reportedly been trapped in the lift for nearly three hours approximately 30 feet of the ground. (Submitted Photo)

Units with the Warren County Sheriff’s Office and Warren County Fire responded to an emergency call on Choctaw Trail for a man trapped in a lift Sunday afternoon.

The man reportedly had been stuck approximately 30 feet off the ground since about 2 p.m. The call came in to Vicksburg-Warren 911 for help at around 4:45 p.m.

The man apparently was cutting limbs from a tree in the front yard of a home on the 1100 block of Choctaw Drive when the lift’s motor failed.

Witnesses said a mechanic was already on the scene and attempted to repair the motor and that lift had been moving up and down “on its own.”

After the first units arrived, 911 dispatched Platform 1 from the Vicksburg Fire Department to assist in the rescue.