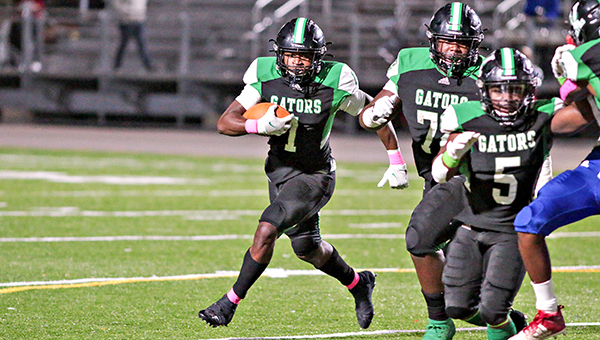 In any close football game, there are always one or two plays that turn the outcome. For the Vicksburg Gators, those just happen to keep coming at the very end, and all too often going the wrong way.

Vicksburg’s 24-21 loss to Cleveland Central last week marked the third time in four games that the result was decided on the final play. The Gators have only won one of those, and both losses came after they tied or took the lead late in the fourth quarter before giving up the winning score.

It’s not an entirely discouraging trend for a rebuilding program seeking to be competitive in MHSAA Class 5A, but it is one they’d like to get on the right side of.

“A lot of games were lopsided last year in the fourth quarter. That’s just how it goes when you’re trying to build a program from scratch, because we only have three starters on offense from last year that are starting on the field now. You’re going to take your lumps like that,” said Vicksburg head coach Todd McDaniel, who is in his first season with the team. “But we’ve been very competitive in a lot of our games and we’re growing from that. We’ve made tremendous strides. Now we just have to learn how, and find out how, to win.”

The Gators have indeed come a long way in a short time, as a developing offense has started to catch up to a solid defense. They’ve averaged 20.5 points per game after starting the season with back-to-back shutout losses, and have rushed for 1,139 yards in the last four.

Vicksburg had 375 rushing yards as a team against Cleveland Central. Sha’Kori Regan led the way with 295 yards — the highest total by a VHS player since 2013 — and two touchdowns.

“At the beginning of the year they couldn’t come off the ball and couldn’t hold a block. Now we’re one of the most physical teams in our district. We just have to get in the win column,” McDaniel said.

The next chance to do that is this Friday, on the road at Ridgeland (4-1, 2-0 MHSAA Region 2-5A). The Titans’ pass-oriented offense is a potentially troublesome matchup for Vicksburg (1-5, 1-2).

The last time the Gators faced a passing offense, a month ago against Natchez, they allowed nearly 200 yards through the air and 34 points. Only one other opponent, No. 3 Neshoba Central, has scored more than 30 points against Vicksburg — and that game was scoreless at halftime.

Ridgeland seems to be even better at throwing the ball than Natchez. Senior quarterback Zy McDonald has 1,414 passing yards this season, to go along with 16 touchdowns and only one interception in 136 attempts. He’s also run for 311 yards and five touchdowns.

McDonald, a three-year starter, has thrown for 9,282 yards and 81 touchdowns in his high school career. He accounted for five touchdowns — three passing and two rushing — in a 61-7 rout of Vicksburg last season.

“They have two dominant receivers and an alpha male at quarterback. He’s one of those guys a lot of people wish they had. He’s a rare kid,” McDaniel said of McDonald. “He can throw every ball, every route. We’ve got our work cut out. We’re going to have our DBs plaster their receivers, get a pass rush and grind that football out when we get it offensively and try to keep them off the field.”

In this case, McDaniel added, the best defense might be a good offense. Vicksburg’s run-heavy Wing-T offense, which can control the clock, is an effective counter to Ridgeland’s air-it-out approach — as long as the Gators can get some first downs and stay on the field while the defense forces some quick stops.

“We run 7-on-7 and 1-on-1s every single day. We have some young guys, some ninth- and 10th-graders, on the back end and we’re going to try and make sure they’re prepared and able to play our zones and get in our drops, and read routes. Hopefully they grow up, because this kid can really throw the football,” McDaniel said. “Our offense is going to have to be just as important as our defense and try to keep that high-octane offense on the sideline.”