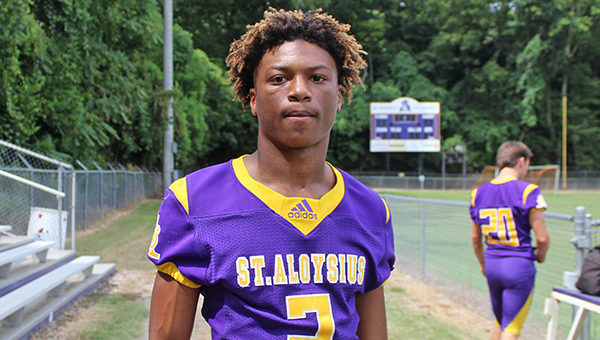 St. Aloysius running back Brennan Williams rushed for 132 yards and scored four touchdowns in a 43-28 win over Washington School on Friday.

The way the Mid-South Association of Independent Schools’ power point rankings work, no playoff berth is set in stone until it is. The St. Aloysius Flashes, though, are pulling their chisel out of the toolbox.

Brennan Williams rushed for 132 yards and three touchdowns, and also had a 70-yard kickoff return touchdown as St. Al defeated Washington School 43-28 on Friday night to all but clinch a berth in the MAIS Class 5A playoffs.

With the win, St. Al (4-5) is tied for 10th in the power point rankings that determine playoff berths and seeding heading into next week’s regular-season finale at Cathedral. Twelve teams advance to the postseason in Class 5A. It’s a remarkable turnaround for a team that scored one touchdown in its first six games.

“I’m very proud of our kids for finishing the game. It was a two-score game for most of the time. We had kids that kept playing hard to the very end,” St. Al coach Stacy Sizemore said. “Right now we’re just working on getting better every day and focusing on our next opponent Natchez Cathedral. I’m very proud of our kids for fighting all season long.”

Padre Gray added 46 yards rushing and a touchdown for St. Al, while quarterback Tristan Wilbanks also had a rushing touchdown and was 8-of-13 passing for 109 yards.

Washington (1-7) scored with just over two minutes remaining to get within 36-28, but St. Al recovered the onsides kick and Williams broke off a long touchdown run to restore the lead to two scores.

Wes Warnock then intercepted a pass on Washington’s final drive, and the Flashes ran out the clock to win for the second time in three games. After scoring 12 points in their first six games,

St. Al has put 104 on the board in its last three — including 38 or more in each of its two wins.
In addition to his late interception, Warnock had 10 tackles and caught three passes for 52 yards. Adam Francisco had 10 tackles as well.

Chase Tucker also had 10 tackles, along with four receptions for 59 yards, and threw a 40-yard TD pass to Cooper Madison on a trick play to open the game.