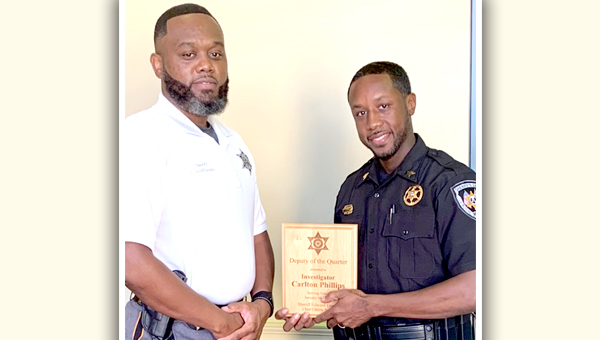 Claiborne County Sheriff Edward Goods presents Investigator Carlton Phillips with the Deputy of the Quarter award for the first quarter of 2020. (Submitted Photo)

Investigator Carlton Phillips, with the Claiborne County Sheriff’s Department, recently received the “Deputy of the Quarter Award” for the first quarter of 2020.

This award recognizes department employees who have provided exemplary service to the community or performed in a manner worthy of recognition. Deputies are nominated by their peers and then voted on by the supervisors and leaders of the Claiborne County Sheriff’s Department.

Phillips started his law enforcement career with the Port Gibson Police Department in June 2018. He attended the Mississippi Law Enforcement Training Academy in September 2018 and graduated in November 2018 with top scores.

With the Claiborne County Sheriff’s Department, Phillips was first hired as a part-time deputy before being promoted to investigator.

“Phillips was selected due to his diligence, tenacity, professionalism and self-motivation investigating felony incidents, which occurred during the first quarter of 2020” Claiborne County Sheriff Edward Goods said. “In addition, Phillips is being recognized for his proactive approach to crime prevention.”

During the first quarter of 2020, Phillips was recognized for the following incidents:

• While conducting a self-initiated special attention check, Investigator Phillips observed a large crowd that had gathered in the parking lot behind the police department after a party. Upon further investigation, Phillips saw a male inside a vehicle with the alarm going off. After Phillips tried to stop the suspect, the suspect fled on foot. Phillips gave chase on foot and apprehended this individual. At the time of the arrest, Investigator Phillips recovered a large amount of drugs from the suspect and was able to contact the owners of the vehicle. Investigator Phillips’ actions demonstrated true courage and selflessness in protecting our community.

“The Claiborne County Sheriff Department is proud to recognize Investigator Carlton Phillips with this award,” Deputy Chief Christy Sykes said. “In addition to the noteworthy actions/incidents listed above, Phillips excelled in conducting self-initiated investigation activities that have resulted in preventing crime and improving community relations with those we all are proud to serve and protect.”