Porter’s Chapel down to its last chance at a… 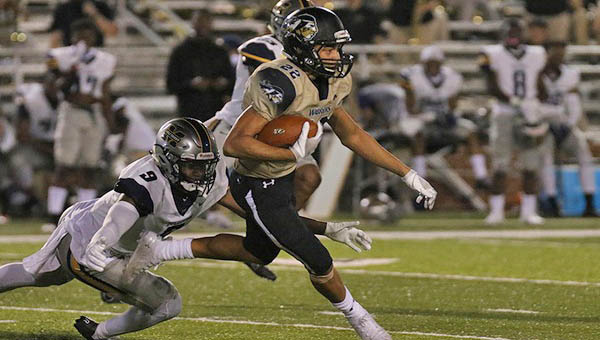 Jaquerrious Williams scored three rushing touchdowns, including a game-winning 25-yard run in overtime, to give Northwest Mississippi Community College a 34-28 victory over Northeast Mississippi on Thursday.

Gary Banks II also had a 57-yard TD run for Northeast to tie the game at 28 early in the fourth quarter.

The score stayed tied through the end of regulation ­— Northwest missed a field goal in the final minute — and went into overtime.

In the extra period, Northwest’s Rod Daniels sacked Northeast quarterback Kevin Hurley for a big loss, and the Tigers were not able to convert on fourth-and-29. Williams then scored on the first play of Northwest’s possession to win it.

Jones finished with 553 yards of total offense and scored 27 straight points in the second and third quarters.

Freshman running back Romal Webb had 23 carries for 167 yards and two scores for Jones, while Paul Hughes II had 14 carries for 58 yards and a touchdown.

Brandon Edmondson ran for 62 yards and a touchdown for Southwest Mississippi, and also threw a touchdown pass. Lyric Hall was 5-of-17 passing for only 53 yards, but threw two TD passes in the fourth quarter — both to Vakelion Campbell.

Gulf Coast 31, East Central 3
Jalen Bracey had 122 receiving yards and a touchdown as Mississippi Gulf Coast opened up its air attack in a rout of East Central.

Bulldogs quarteback Philip Short completed 16 of 27 passes for 242 yards and two touchdowns. Deondre House ran for 91 yards on only 12 carries.