Community starts to rally around teen who was robbed… 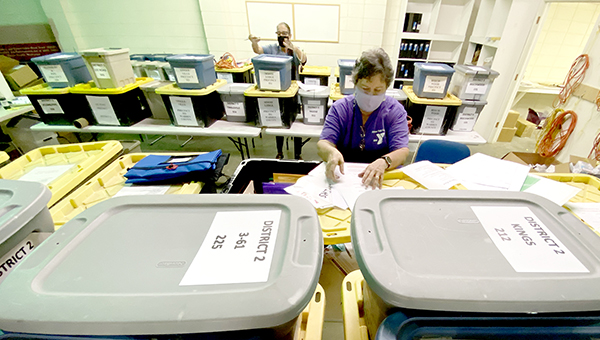 Warren County Election Commissioners Nancy Hale, front, and Debra Grayson, back, pack election supplies into large tubs Wednesday afternoon. The commissioners have worked to prepare all of the safety and election supplies needed to all the precincts ahead of Tuesday's general election. (Tim Reeves/The Vicksburg Post)

Members of the Warren County Election Commission have spent the past few days packing boxes. They have counted masks, pens, facemasks and plexiglass shields.

In recent weeks, poll workers have been hired and trained, and 112 voting machines have been calibrated and tested.

At this point, all that is left to be done is open the polling places Tuesday for what is expected to be huge wave of residents casting their ballots for our next president and helping decide a number of historic issues.

Warren County Election Commission Chairwoman Sarah Dionne said the interest in this year’s general election has reached a level unlike what she has seen in more than 20 years of working elections.

“In all regards, this is at the highest level of any election I have been involved in my 20-something years,” she said. “There has been much more preparation needed and far more interest from the public. We’re getting obviously higher voter turnout so far, and we expect that to be true on election day.”

During the 2016 presidential election, 1,775 absentee ballots were cast. As of Thursday afternoon, 3,309 had already been cast and there is still time to do so. The absentee deadline is Saturday at 5 p.m. at the Warren County Courthouse.

“I’ve never seen anything like it,” Warren County Circuit Clerk Jan Daigre said. “The 2016 absentee total was the highest number we had ever had and we passed that figure more than a week ago.”

Daigre said she hopes this surge in voting will start a trend.

“I think the presidential election has driven the increase in interest and turnout thus far,” Dionne said. “The election every four years is always our highest voter turnout and this one seems to be bringing out even more voters than in the past.”

In 2016, the county saw 63.61 percent of registered voters turn out to the polls. Given the number of absentee votes cast so far is on pace to more than double the 2016 figure, it is likely the county will see a higher percentage of voters participate this year.

In addition to the presidential election, several high-profile ballot initiatives in Mississippi and a close senate election will draw voters to the polls. Democrat Mike Espy is challenging Republican incumbent Cindy Hyde-Smith for a senate seat. Voters will also decide on initiatives to legalize medical marijuana and whether to approve a new state flag.

For the voters swarming the polls, this election will be far different because of the safety precautions being taken due to the ongoing COVID-19 pandemic.

Although masks will not be required while voting, poll workers will be wearing them. Those voting will be asked to use their own pens, or separate pens provided when signing in. Cotton swabs will be used by voters to make their selection on the voting machine screens and poll workers will routinely clean the machines throughout the day.

Social distancing will be required for those in the polling place and those waiting to enter the polls. Also, curbside voting will be available to anyone concerned about voting in a confined area or those who might have COVID-19 but still want to cast a ballot.

“We are on track, we’re getting there. It’s just a huge job with all this extra COVID packing going on and all the safety shields and so forth. But, we’re good,” Dionne said. “All the training is completed. We have our poll workers hired and trained. All of our supplies are almost packed.”

In addition to the safety tips, officials offered some other advice for voters to help election day flow smoothly for everyone. From doing their homework on the candidates to picking a good time to visit their local precinct, a little preparation goes a long way.

“If you’ve voted at the same location for several previous elections, you know which times of day are the busiest. Peak times are typically before and after work and during lunch hour,” said Sumner Davis, head of the Mississippi State University Extension Center for Government and Community Development. “One of the safest and fastest ways to vote in person is to go mid-morning or mid-afternoon.”

Leaving the polling place as soon as voting is done also limits the potential for exposure.

“Elections sometimes double as social events in many communities, with folks visiting with each other while they’re waiting in line or after they cast their ballot,” said Mississippi State University Extension health specialist David Buys. “This year, it may be more appropriate to relocate to a less crowded area once you’ve finished doing your civic duty.”

For more election information and data about the initiatives on the ballot, visit www.sos.ms.gov/vote.