Warren Central still in command of its playoff fate… 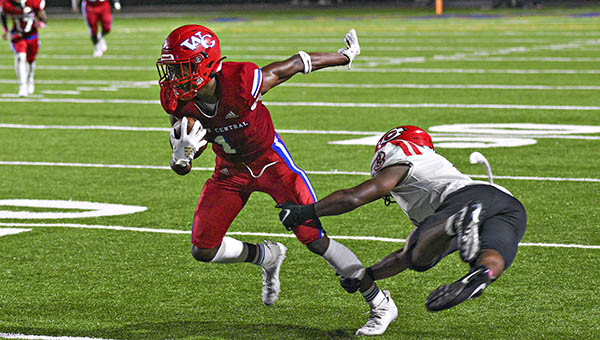 Warren Central’s Tevin Bell (1) breaks a tackle after catching a pass llast week against Clinton. The long-running rivalry series between Warren Central and Clinton could be forced into hiatus next season after they were put in two different regions in the latest MHSAA realignment. (Courtland Wells/The Vicksburg Post)

For the first time in a generation, Warren Central will have a brand new set of region opponents in football.

Warren Central will move from its longtime home of Region 2-6A to Region 3-6A in 2021, under the reclassification plan released by the Mississippi High School Activities Association on Thursday.

The move will put Warren Central in the South half of the state’s playoff brackets and break up several longstanding rivalries for at least the next two years. Warren Central had been in Region 2, which competes in the North half and is composed mostly of schools along the I-20 corridor, since 1995.

“I did not see this coming,” Warren Central football head coach Josh Morgan said. “It is what it is. There was a lot of talk about us going south two years ago when they did this. We were in that conversation. It’s going to shake some teams up.”

Warren Central will compete in Region 5-6A for basketball, soccer, baseball and most other sports, along with Northwest Rankin, Pearl and Terry.

The Vikings were in a region with Northwest Rankin from 2005 to 2018, and have had recent non-region series with Brandon and Pearl. The move to the south, however, could put other long-running rivalry series with Clinton and Madison Central on hiatus.

Warren Central and Clinton have played each other 57 times, and every year but two since 1965. Madison Central opened in 1991, and it has been in the same region with Warren Central since 1995. Morgan was hopeful that those series could continue as non-region contests.

Warren Central’s move to the south was caused by a demographic shift in the MHSAA’s Class 6A membership. The top 32 schools according to enrollment are classified as Class 6A, and are divided into four regions of eight for football, when the MHSAA realigns every two years.

Seven of the 32 Class 6A teams are located in DeSoto County just south of Memphis, and four more are north of the U.S. 82 corridor. To maintain competitive and geographical balance, at least one of the Region 2-6A teams in the I-20 corridor — Warren Central, Madison Central, Clinton, Germantown or Murrah — was likely to be moved south, and it was Warren Central that drew the short straw.

Another longtime member of Region 2-6A, Greenville, dropped down to Class 5A in this round of reclassification. Greenville had the state’s third-largest enrollment as recently as 2010, but was No. 38 in 2020.

“We knew (DeSoto County) was growing, and didn’t know how it was going to shake out,” Morgan said. “We’re over here on an island. There’s nobody around us. We felt like it was a strong possibility that this would happen.”

The new Region 2-6A will include Clinton, Madison Central, Germantown, Grenada, Murrah, Oxford, Starkville and Tupelo.

Region 1-6A will include Center Hill, DeSoto Central, Hernando, Horn Lake, Lewisburg, Olive Branch, South Panola and Southaven. South Panola has been in Region 2-6A for the past two years.

Morgan noted that, although it’s been a while, Warren Central does have some history with the southern half of the state. When the modern MHSAA playoff alignment was started in the early 1980s, Warren Central was placed in the south and competed against those teams from 1981-94. All three of its state championship game appearances, and both of its state titles in 1988 and 1994, came while playing in the south.

“We’ve been in the south before. A lot of times,” Morgan said.

While Warren Central is heading south, Vicksburg High will remain in a Region 2-5A lineup that is largely unchanged.

Region 2-5A in 2021 and 2022 will contain Vicksburg, Callaway, Canton, Forest Hill, Holmes County Central, Jim Hill, Neshoba Central, Provine and Ridgeland. Only Jim Hill and Forest Hill are new to the league. Cleveland Central was removed, and the league was expanded to nine teams, which will cost Vicksburg one non-region game on the schedule.

For basketball, baseball and softball, Vicksburg will be in Region 4-5A with Jackson schools Forest Hill, Jim Hill, Provine and Callaway.

For soccer, however, the Gators will compete against Cleveland Central, Forest Hill and Greenville in Region 3-5A. In volleyball, they will be in Region 6-5A along with Brookhaven, Florence and Forest Hill.