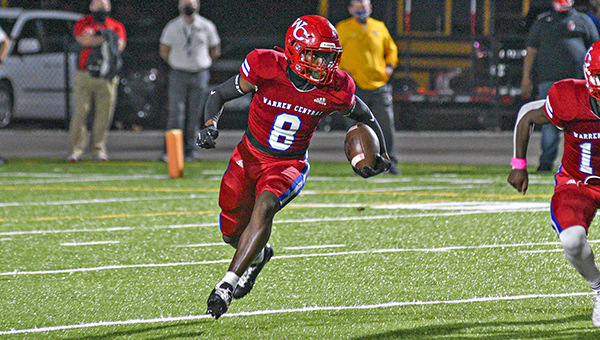 There are way too many scenarios and complex tiebreakers in the Region 2-6A playoff race to try to figure it out yet. With two weeks left in the regular season — and only one game for most teams — five teams are not only alive for four postseason berths, there is at least one plausible scenario where they all end up tied for first.

Amidst all of the chaos, however, Warren Central remains in control. Despite suffering their first loss last week, all the Vikings (7-1, 5-1 Region 2-6A) need is a win in this week’s regular-season finale against South Panola (7-2, 4-2) to separate from the pack and earn their spot.

“We haven’t thought that far ahead. We just know that we have to be the best us that we can be, and that’s really our focus,” Warren Central coach Josh Morgan said of the various playoff scenarios. “We know what happens if we win. We know if we lose, we put our faith in a situation that we really can’t control. There’s all kinds of possibilities and we probably wouldn’t know the answer to that until the following week of games finish. So we all know what’s at stake. We want to stay on the end where we control what happens to us, for sure.”

Among the five teams in contention in Region 2-6A — Warren Central, South Panola, Clinton, Starkville and Madison Central — only Warren Central and Clinton (6-2, 5-1) have a clear path to the playoffs and region championship.

No matter what happens between Starkville and Clinton, however, Warren Central can secure at least a second-place finish and host a first-round playoff game if it beats South Panola. Achieving that goal, Morgan said, needs to be the top priority.

“Everybody in our district is good enough to win a state championship. Not only make the playoffs, but win the championship. So we have to be focused and bring it week to week. That’s first and foremost,” Morgan said. “It seems like last week was just a recipe for disaster. If it could go wrong, it went wrong. We definitely have to regroup and get ready to play a really good South Panola team. All our goals are still attainable. This week is big for a number of different reasons.”

Warren Central and South Panola were originally scheduled to play on Nov. 6, but outside forces led them to move it up a week. Warren Central’s game at Starkville was turned into a forfeit victory for the Vikings because of a COVID-19 outbreak among Starkville’s players. South Panola also got a forfeit win and an open date because Murrah opted not to play at all this season.

“We both had open weeks and a mutual agreement, and it just made a lot of sense,” Morgan said.

While Morgan was hesitant to embrace the benefits of having an open date in the final week of the regular season, he said he was glad to have a quick turnaround following last week’s debacle against Clinton.

The Vikings got out to a 10-0 lead in the first half, then gave up 31 straight points on their way to a 31-16 defeat. The Vikings’ vaunted defense, which had allowed just three touchdowns in its first six games, surrendered four in the second half. Short punts and a stagnant offense only added to a bad night that ended with a torrential downpour as the teams walked off the field.

“It was a weird night, and then it felt like in the second half we definitely weren’t ourselves,” Morgan said. “We didn’t handle the stuff the way that we characteristically normally do very good at. We have a lot to learn from. I think our guys understand that.”

Now the Vikings need to deal with a resurgent South Panola team that could be fighting for its playoff life.

The Tigers started the season ranked No. 2 in the Mississippi Associated Press Class 6A poll, but fell out of the top five entirely with back-to-back losses to Starkville and Clinton. They’ve won four straight games since then — two of them forfeits over COVID-19 opt-outs Murrah and Greenville — and clawed back into the race by beating Madison Central 12-10 last week.

A loss to Warren Central would likely ensure South Panola can finish no better than fourth, and might put it out of the playoffs entirely. South Panola has not missed the playoffs since 2002. It has won nine state championships during its 18-year postseason streak.
Morgan said the combination of desperation and talent makes the Tigers a dangerous opponent.

TICKETS:
Tickets for all Warren Central and Vicksburg High games must be purchased online at gofan.com