Gators’ youth movement is paying off 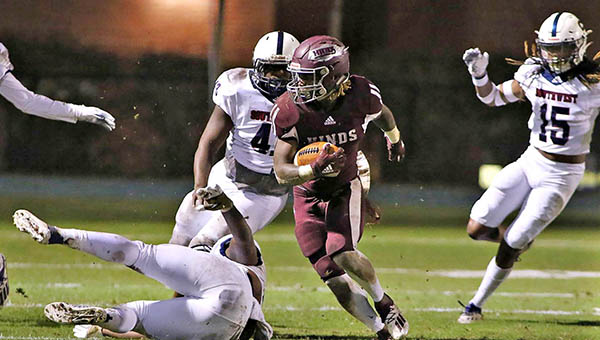 Hinds Community College’s first two games this season came down to the final play. This one was pretty much decided after the first.

Dajon Richard rushed for 145 yards and two touchdowns, and Hinds scored 21 points in the first quarter on its way to an easy 56-21 victory over Southwest Mississippi on Thursday.

Hinds (2-1) finished with 487 yards of total offense, with 346 of it coming on the ground. Six of its eight touchdowns came on the ground.

Quarterback BeSean McCray had 83 rushing yards and one touchdown, while Robert Jackson III and Kobe Dillon scored once each.

McCray was also 9-of-17 passing for 134 yards and two touchdowns. The Eagles led 28-0 early in the second quarter, before Southwest Mississippi (0-4) got on the board with a 75-yard touchdown pass from Brandon Edmondson to Dalyn McDonald.

Jaidyn Wilson scored on a 2-yard run with 8:52 left in the third quarter, but Hinds scored two quick touchdowns to push the lead back to 28 points.

Edmondson finished the night 3-of-14 for 150 yards, with two touchdowns, two interceptions, and 57 rushing yards.

Jones 37, Pearl River 13
Jones College piled up 321 yards and 30 points in the first half Thursday night, and crushed Pearl River Community College in the 90th annual “Catfight” in Ellisville.

Quarterback Quaterius Hawkins completed 9 of 17 passes for 145 yards and a touchdown, while the Bobcats’ defense forced five turnovers.

Chris Holifield Jr. rushed for 88 yards and a touchdown for Pearl River (1-3).

Hurley’s touchdown run with 2:59 left in the third quarter turned out to be the game-winner.

The teams combined to throw only 13 passes in the game, but had 513 rushing yards between them.

Kyren Batey led Holmes with 161 yards and a touchdown, and Devontaye Bankston had 67 yards.

Edwards completed 18 of 30 passes for 166 yards and the one score. Hilbert caught five passes for 89 yards.

East Central rallied from a 10-0 deficit to beat Co-Lin for the second year in a row. It had lost the previous 10 meetings.

East Central linebacker Trenton Ladner had 12 total tackles, one sack, three tackles for loss and a forced fumble. He also blocked a field goal attempt by Co-Lin in overtime.

Xavier Curry and Hayden Hill each had 17 tackles for Co-Lin. Former Warren Central star Lamar Gray had seven tackles, including one for loss.