Names of those involved in violent accident Wednesday released 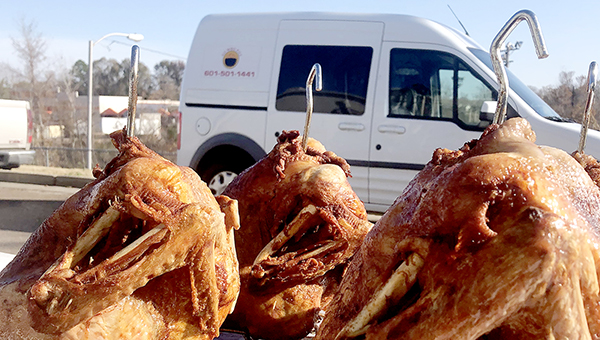 Thanksgiving is approaching, and while many will be roasting the traditional holiday turkey, one local caterer will be frying the birds.

Perry Boyd, owner of Gumbo Pot, has been frying turkeys for more than 20 years.

“The concept of frying turkeys started back in the ’70s,” Boyd said, adding it was an experiment folks in south Louisiana tried.

But while these “Cajun” turkeys were tasty, they did not become popular until the beginning of the “early 2000s,” he said. Just like any meat that is fried, Boyd said, the turkeys are crisp on the outside and juicy on the inside.

To prepare a turkey for frying, Boyd said he first injects the bird with a sauce consisting of butter, garlic, hot sauce, Cavender’s and poultry seasonings.

“I then rub the turkey down with the same ingredients and brine it overnight in Louisiana hot sauce,” he said. “You would think it would be hot but it’s not. It just gives it a really good flavor.”

Using either peanut or vegetable oil, Boyd then deep-fries the turkey for 35 to 45 minutes, depending on the weight, at 350 to 400 degrees.

Boyd said he does use a temperature probe to check the meat and removes it from the cooker once the turkey has reached an internal temperature of 165 to 170 degrees.

“A fried turkey has a different flavor than a roasted turkey,” Boyd said. “When you roast a turkey you have a hard time getting it moist and when you fry it, the juices and spices marinate more into the meat so it makes your meatless dry.”

A tip Boyd gave for anyone who wants to fry a turkey on their own is to make sure the turkey is completely thawed and the frying is done outside. If there is any ice left on the bird, it can cause a fire when it hits the hot oil, or cause the oil to splatter.

Having a fire extinguisher nearby can also help in case of an accident.

According to data from the National Fire Protection Association, nearly 1,000 homes are destroyed each year by deep fryer accidents.

“It has to be thawed out through and through. Make sure the turkey is at room temperature — 50 to 75 degrees to where there is no ice before if goes in the fryer,” he said.

To cook his turkeys, Boyd uses a large cooker. He said he can fry as many as 10, 12-to-14-pound turkeys at one time. He “guesstimated” that the number of turkeys he has fried is in the thousands.

Boyd’s love of cooking is a family affair. He started working at his aunt’s restaurant in Rolling Fork, and he said he had a great uncle who lived in south Louisiana who did a lot of cooking, too.

His maternal grandparents were also from south Louisiana and were true Creoles. Boyd said they would talk French and claimed they had a gumbo recipe that had been in the family for 200 plus years.

For those interested in purchasing a fried turkey, Boyd is currently taking orders.

The cost is $55 and each turkey will feed about 15 people.

The Gumbo Pot is located at 3401 Halls Ferry Road, Suite 5. For more information or a complete listing of the menu, go to their Facebook page or visit gumbopot.com.