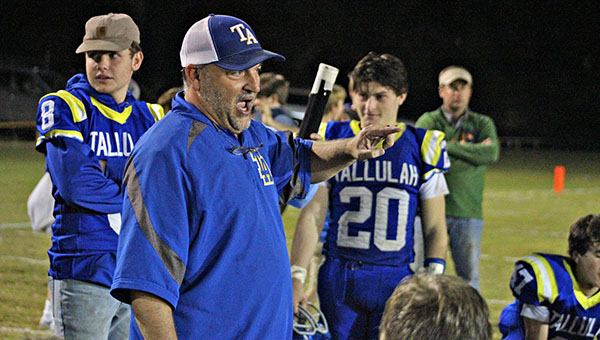 Tallulah Academy football coach Bart Wood talks to his team after they beat North Sunflower Academy 50-30 in the first round of the MAIS Class 1A playoffs on Friday. (Ernest Bowker/The Vicksburg Post)

For the past five years, the road to success in the Mid-South Association of Independent Schools’ 8-man football division has been U.S. 65 in Northeast Louisiana.

Tallulah Academy and Briarfield Academy, separated by about 30 miles on that particular piece of asphalt, have won five consecutive 8-man championships and 111 games combined since 2015. Somehow, they’ve avoided each other on the biggest stage of all — until now.

Tallulah (8-3) and Briarfield (10-0) will play Friday at 11 a.m. at Jackson Academy for the MAIS Class 1A championship. The District 3-1A rivals have met often during their respective dynasties, including twice in the playoffs, but this is the first time they have played each other in a state championship game.

Because of their geographic proximity and similar size, the Trojans and Rebels have long been rivals — as well as friends and family. Tallulah running back Walker Sullivan, whose girlfriend attends Briarfield, said students from both schools often cross paths socially as well as on various athletic fields.

“Whenever we’re younger, we played with them during peewee. I could always see us playing Briarfield in the state championship,” Sullivan said. “We know them from playing with them for so many years. When we were kids we played them. Then you see them sometimes at a hunting camp or something.”

Briarfield senior linebacker Crews Fortenberry said the familiarity between the teams and their respective communities always creates a lot of excitement when they play, especially in football.

“Any time we play Tallulah, it’s a big game. I think last year, at our semifinal game playing Tallulah, the crowd was bigger than the state championship game,” Fortenberry said.

Both Wood and his Briarfield counterpart Beau Travis said they were hoping to face each other in the championship game. Tallulah and Briarfield met in the Class 1A semifinals last season, and in the first round in 2017. Briarfield won both of those meetings on its way to its two MAIS championships. Overall, the series is tied 4-4 since Tallulah joined the 8-man division in 2014.

“I think that’s awesome. That’s what I was hoping for. There’s no better way to end the season than playing your rival in a state championship game,” Travis said. “I graduated from Briarfield and it was a rival then. It’s always a fun game to play in. It’s a fun game to coach also.”

“This will be the fourth time we’ve played, because they’ve got the same team they had last year. They did not lose anybody. We changed a little bit, but they haven’t,” Wood said. “We know what they do. Now if we can stop them, that’s another thing. For us to hold them to 16 the first time was amazing, with the firepower they’ve got.”

Like Wood, Fortenberry said there are no secrets between the teams.

Briarfield enters Friday’s championship game as the defending Class 1A champion, with a 17-game winning streak since its loss to the Trojans in September 2019.

Tallulah is coming in with a rare bit of underdog status. It was 3-3 after a mid-season losing streak, but has since ripped off five wins in a row and is averaging 56.4 points per game in that span.

Wood pointed out that all three of his team’s losses this season came to teams playing for state championships — Briarfield, Manchester and Riverdale; the latter two are playing for the Class 2A title Thursday — and both he and his players say they never doubted their potential.

“I knew our team would come along and start playing together,” said Sullivan, who has rushed for 1,094 yards and 22 touchdowns this season. “We know each other very well and we knew what we needed to do. It was just if we were going to do it.”

While Briarfield returned its entire team from last season — there were no seniors and only five juniors on the 2019 roster — the one-year absence from the championship game has allowed Tallulah’s players to become hungry for a title.

Some of them, like Sullivan, started on the 2018 championship team but most were role players at best. Having a chance to win a ring on their own makes this season special, Sullivan said.

“The ones before, we were all there for that game but we didn’t get much playing time. It’s just different this time,” he said.

ONLINE:
• All MAIS championship games will be streamed live at maisnetwork.org and broadcast on radio on 102.5 FM
• For full coverage, follow us at vicksburgpost.com, facebook.com/thevicksburgpost, and twitter.com/vixpostsports