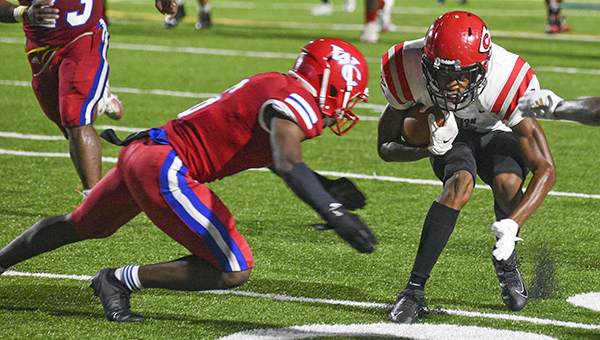 For 55 years, Warren Central and Clinton have forged a rivalry on the football field. They’ve played in good years and bad, for regular-season championships, in the playoffs and just for bragging rights. More often than not, their game was pivotal to the story of each team’s season.

That might all be going away soon. The MHSAA’s latest realignment plan moved the teams to separate regions and threatened to put their long-running series on hiatus. It also makes it fitting that they come together for one last, epic showdown.

Warren Central (9-2) will head 35 miles east on I-20 to face Clinton (8-2), its oldest rival, in the second round of the MHSAA Class 6A playoffs Friday at 7 p.m. It is the 58th meeting between the teams, second this year, and will determine whose season will be remembered forever and whose will end in frustration.

“It’s just another chapter in a great book. That’s the best way I can put it. We’ll see how good of a chapter it is,” Warren Central coach Josh Morgan said. “I expect it to be a highly contested game, and with a lot riding on it that puts more emphasis on an already heated game. It’ll be a lot of fun.”

Warren Central and Clinton have played every year but three since the former opened in 1965. This is the third time they’ve met in the playoffs, and has a similar feel to the last one.

They also faced each other in the second round in 2016, when Clinton was the Region 2-6A champion and featured a talented multi-threat quarterback with Cam Akers. Clinton is also the region champ in 2020, it’s the second round again, and this time the talented QB is senior Caleb Miller.

In his last three games, Miller has rushed for seven touchdowns and thrown for four. He took over the regular-season meeting with Warren Central, with two rushing and two passing touchdowns in the second half of the Arrows’ 31-16 victory. Miller followed that up with four total touchdowns each of the next two weeks as Clinton beat Starkville and Horn Lake by a combined score of 70-14.

“When they moved out of the Wing-T offense, they really opened it up with him and he’s done a good job being a complete football player. He’s got a big arm, makes really good decisions, and obviously is a great athlete and runs the ball really well,” Morgan said. “You’ve just got a complete quarterback, mentally and talent-wise as well. He definitely makes them balanced and gets them out of a lot of bad plays and bad situations. If you want to look at the reason for their success, it’s not hard to find. He’s the reason.”

Miller’s performance against Warren Central not only helped propel the Arrows to the Region 2-6A title, it left some scars on the Vikings. Their staunch defense got a rare torching, giving up 31 straight points after being staked to a 10-0 lead. A 7-0 record and a chance to clinch the program’s first outright region championship in 16 years evaporated in 24 awful minutes.

While giving plenty of credit to Clinton, Morgan has not been shy in calling it the worst game his team has played this season. Getting a rare chance at redemption against a team that humbled them only added another layer of drama to the rematch, he said.

“We were not at our best. We did not play very well. They had some things to do with it, but a lot of it was we just weren’t pleased with how we played, and executed, and all that,” Morgan said. “Hopefully we’ve grown from it. We have an opportunity on a bigger stage to be better. That’s all it is, is an opportunity. I hope our kids take advantage of it.”

This round of the playoffs has become familiar ground for the Vikings. What lay beyond this is not. This is the fourth time in six seasons that Warren Central has been to the second round, but it has not broken through to the semifinals since winning its last state championship in 1994.

One of those second-round games, against Akers and Co. in 2016, ended with a 27-21 loss. The Vikings had a game-tying pass slip through a receiver’s hands in overtime. Getting on the right side of history this time, and ending 25 years of playoff frustration against perhaps the school’s biggest rival, is not just an opportunity, Morgan said — it’s an opportunity to savor.

“It’s a big game, kind of familiar territory. A couple years back we were in the same position,” Morgan said. “It’s a really great opportunity for us, and we’re just trying to get our guys to play their best football game and be at their best this time of the year and take advantage of it.”