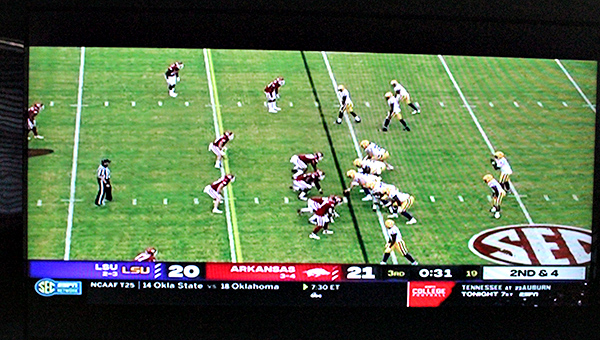 Sports column: Keeping up with the football TV schedule is a chore

One of my weekly tasks in the sports department is hunting down and typing up the college football and NFL TV schedules for the week. I rather enjoy it. It marks the start of a new week and gives me an idea of which games are on the schedule and when, and which ones might be worth watching.

A couple of times and networks might need to be refreshed later in the week when network assignments are finalized, but for the most part it’s a set-it-and-forget-it procedure that takes about 15 minutes.

Not this year. Thanks to COVID-19, keeping the TV schedule current has been like trying to catch a plastic shopping bag blowing around in a tornado.

When a game is canceled, it leaves a hole in the schedule and TV networks, much like nature, abhor a vacuum. Game A’s cancellation moves Game B from ESPN to ESPN2, and Game C from ESPN2 to ESPNU. And where did Game D come from? Who knew those teams were even playing this week?

Last week, more than 15 college games — almost all of them scheduled to be televised — were canceled and others rushed in to fill the TV void. The list has not been as long so far this week, at least not yet, but it is creating some weird adjustments.

Ole Miss and Texas A&M were scrubbed from the coveted 2:30 p.m.Saturday time slot on CBS and replaced not with another Southeastern Conference game but one between San Diego State and Nevada. The latter was originally scheduled to be on the CBS Sports Network on cable but gets a much bigger audience now.

There is no word on if the iconic “SEC on CBS” theme will be replaced by John Denver’s “Rocky Mountain High” or whatever the theme song of the Mountain West Conference might be.

The adjustments are a boon to the small conferences that get a little more exposure. It seems like every Sun Belt Conference game this season has wound up on mainstream cable, rather than the usual abyss of a streaming service.

Some teams don’t get the same treatment. Southern Miss is stuck on the streaming service ESPN+ for its home game against UTSA.

At least Southern Miss is a small-conference team whose conference has a second-tier TV deal. Even with a gaping hole in the 2:30 TV window, Missouri and South Carolina still could not be budged off of the SEC Network Alternate Channel at 6:30 p.m. If you don’t know what channel that is on your cable or satellite provider, start around the 400s and work your way down.

So, Mississippi State and LSU fans can take solace in their disappointing seasons. At least they’re not bad enough to be exiled to the TV equivalent of a deserted island — no matter how much their fans wish they were.