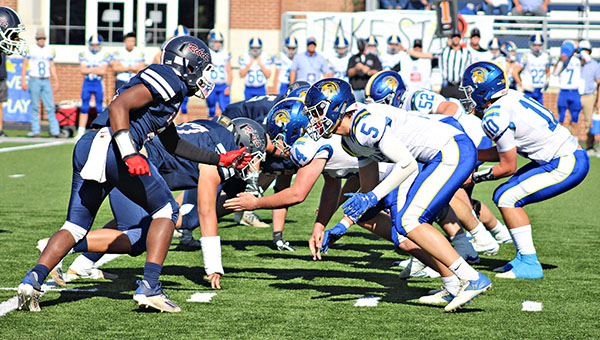 Briarfield Academy and Tallulah Academy players await the snap at the start of a play in the 2020 MAIS Class 1A championship game. (Ernest Bowker/The Vicksburg Post)

You’re in Four Down Territory, where each week we break down four notes, nuggets, stats and trends from the weekend that was in Mississippi high school football, college football and the NFL.

But, upon further review, it certainly helped.

The MAIS uses a video instant replay system for its championship games, and Briarfield was on the right side of four calls that were overturned in its 46-34 victory Friday afternoon.

Three of the calls reversed apparent touchdowns that were scored by Tallulah.

Dee Morgan appeared to score on a quarterback sneak in the second quarter, and again in the fourth, but a review showed he was down just short of the goal line both times.

Just before the second Morgan touchdown that was negated, Carter Sullivan appeared to stretch the ball across the goal line as he was tackled at the 1-yard line, but was ruled down. Tallulah coach Bart Wood unsuccessfully challenged the call.

The Trojans still scored on both of those drives. The third reversal, however, proved to be a key turning point in the game.

With about three minutes left in the third quarter, Tallulah running back Carter Sullivan was ruled down at the end of a 4-yard run near midfield. Briarfield coach Beau Travis immediately threw his replay flag to challenge the call, however, believing Sullivan had fumbled.

After reviewing the call, the replay official sided with Travis and Briarfield was awarded the ball. T.J. Baker scored on a 52-yard run two plays later to give the Rebels a 32-20 lead. Tallulah cut the deficit to one score twice in the fourth quarter, but never again had the ball with a chance to tie the game.

“I knew when it happened that he fumbled it. As soon as (linebacker Carter Coullard) hit him and he started falling down I saw the ball hit the ground,” Travis said. “There wasn’t a doubt that he got it, but you still have to review it. I know it was a tough call for the officials, but that was huge. That was a momentum swing. That was the difference in the game.”

After being on the wrong end of four calls, including the one that he unsuccessfully challenged, Wood said he was not a fan of the replay system.

“Not at all,” Wood said. “How do you do replay when you haven’t done it all year long?”

2
Mississippi State went on the road to face No. 13 Georgia on Saturday night and gave the Southeastern Conference’s other Bulldogs all they could handle despite bringing only 49 scholarship players and a handful of walk-ons to Athens.

The game was tied at the end of the third quarter, but J.T. Daniels threw a 40-yard touchdown pass to Kearis Jackson with 9:50 left in the fourth to give Georgia a 31-24 victory.

Mississippi State was below the SEC’s minimum of 53 scholarship players and could have postponed the game, but elected to play. It had 54 players available two weeks ago against Vanderbilt, and postponed its previous game against Auburn because of a COVID-19 outbreak.

Besides ongoing issues with COVID-19 that are affecting most of the country’s teams to some degree, Mississippi State has had 18 players leave the program for various reasons as the season has unfolded.

The players who have remained said they’ve done their best to ignore the low numbers or use them as an excuse for the team’s struggles. Mississippi State has a 2-5 record heading into this Saturday’s Egg Bowl game at Ole Miss.

“We can only control the things that we can control, and not worry about who’s here or who should be here,” linebacker Erroll Thompson said. “You find out a lot about yourself when adversity strikes, so I feel like tonight we took a step together and fought the best we have probably fought all year.

3
This has largely been a forgettable season for LSU. The defending national champions stumbled out of the gate with a season-opening home loss to Mississippi State and have struggled to gain any traction in the SEC West standings since then. They are 3-3 heading into this week’s game at No. 5 Texas A&M.

Despite those struggles, the Tigers have managed to keep one streak intact. By beating Arkansas 27-24 last weekend, they avoided back-to-back losses for the first time since 2015.

LSU has a 13-0 record under head coach Ed Orgeron following a loss, and has not lost consecutive games since dropping three in a row to Alabama, Arkansas and Ole Miss in November 2015.

4
The New Orleans Saints beat the Atlanta Falcons 24-9 on Sunday for their seventh consecutive victory, and tied an NFL record in the process.

The Saints held Atlanta to 59 rushing yards, with Todd Gurley leading the Falcons with 26 yards on eight carries. It was the 53rd consecutive game, including the playoffs, in which the Saints have not allowed an opposing running back to rush for more than 100 yards.

The Saints tied the 1989-92 Philadelphia Eagles for the NFL record, and will try to break it next Sunday on the road at Denver.

The last time the Saints allowed a 100-yard rusher was Nov. 19, 2017, when Washington’s Samaje Perine finished with 117 in a 34-31 Saints victory. Since then, only two running backs — Atlanta’s Devonta Freeman in 2017 and Minnesota’s Dalvin Cook in last season’s playoffs — have even gotten to 90 yards.

Every other NFL team has allowed at least one 100-yard rusher since the start of the 2019 season.