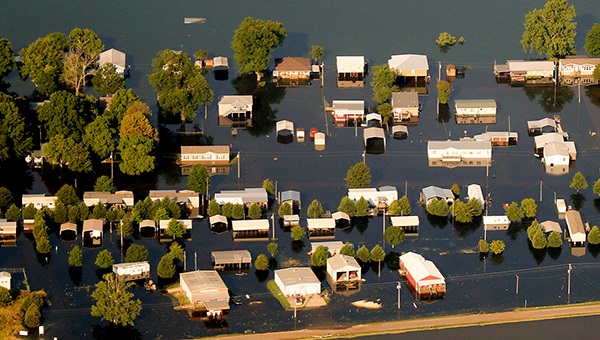 Homes in the Eagle Lake community are surrounded by water during the historic Yazoo Backwater Area flood in 2019. (Walter Frazier/The Vicksburg Post)

As the deadline for public comment nears, officials with the U.S. Army Corps of Engineers Vicksburg District report receiving a large number of people have responded to its Supplemental Environmental Impact Statement supporting the installation of a pumping station to ease flooding in the Yazoo Backwater Area, a District spokesperson said.

The deadline for public comments on the Corps’ report is Monday.

“We’ve been getting a solid response,” said Jessica Dulaney, acting chief of public affairs for the District. “We’ve gotten plenty of comments through the means we’ve provided — email, postal and text or voice mail.”

An exact number is undetermined, she said, adding, “We have received thousands of comments to date.”

“We’ve seen the devastation that the backwater flooding has caused to Mississippi agriculture, farmers, ranchers and wildlife for years now, unnecessarily,” Mississippi Agriculture Commissioner Andy Gipson said in a statement urging people to write letters to the Corps supporting the project.

“The solution is simple, we need to finish the Yazoo Pump Project, which would prevent flood damage to urban and agricultural areas throughout the state for years to come,” he said. “We need to stand up for our friends in the Mississippi South Delta and help them in their time of need. It’s time to finish the pumps.”

Dulaney said the comments received so far represent a wide range of viewpoints on the project. She said people are encouraged to read the SEIS to understand it before making a comment.

She said representatives from the District, the Corps’ New Orleans District and the U.S. Army Engineer Research and Development Center are reading the responses, helping sort them and in some cases responding to comments.

Among the comments supporting the plan was a letter from U.S. Sen. Cindy Hyde-Smith to District commander Col. Robert Hilliard.

“Actual flood events over the past 10 years, combined with new environmental data, have proven that only good can come from the construction of the pumps.” Hyde-Smith wrote.

“Improved flood protection for the Yazoo Backwater Area is long overdue, and I commend the Corps of Engineers Vicksburg District for working diligently to release the Draft SEIS for public review,” she added. “I look forward to the Corps releasing the Final SEIS and signing a Record of Decision (ROD) for the Yazoo Area Pump Project as swiftly as possible.”

The Corps’ Vicksburg District in October released the supplemental statement in October.

The supplemental report recommends a modified project that includes relocating the Yazoo Backwater pumping station from the Steele Bayou Control Structure to Deer Creek, acquiring thousands of acres of conservation easements for reforestation and the installation of 34 supplemental low flow groundwater wells to enhance aquatic resources.

The SEIS comes a year after local, state and federal elected officials joined communities throughout the backwater area in calling for the pump project to be completed and came as the area continues to recover from the impact of the historic 2019 Yazoo Backwater Flood.

Dulaney said the final SEIS will be published in the Federal Register and released for a 30-day state and agency review.

If substantial comments are received during the state and agency review, the Vicksburg District will respond in coordination with U.S. Army Corps of Engineers Headquarters.

Once the final comments are addressed, a record of the decision will be prepared and submitted to headquarters along with the final SEIS.

The commanding general for the Corps’ Mississippi Valley Division will determine whether to approve the plan.

The present schedule for a signed Record of Decision is January.

The pumps are expected to move 14,000 cubic feet of water per second from the land or Delta side of the structure to the riverside if and when the Steele Bayou Control Structure gates are closed due to high river stages.

Designs had it protecting about 630,000 acres in the South Delta from flooding. Flooding to residential and non-residential structures in the Delta would be reduced by 68 percent when the pump station is completed, according to a report from the Corps.

The EPA took into account multiple revisions in the plan in its veto but concluded the project would adversely affect area wetlands and wildlife.

The project took on new life during the 2019 flood when backwater area flooding reached a record level of 98.2 feet.

Flooding in the Yazoo Backwater area covered land in the Delta for 219 days and reached a record level of 98.2 feet during the 2019 flood, covering 548,000 total acres of land including 231,000 acres of cropland.

The flooding inundated the Eagle Lake community, forcing many residents there to leave their homes and evacuate to other areas. The water also overtopped Mississippi 465, Mississippi 16 and Mississippi 1.

Many of the backwater residents and local officials blamed the Environmental Protection Agency’s decision to veto the construction of the pump station, which was to be built on the Steele Bayou Control Structure to help protect the South Delta from flooding.