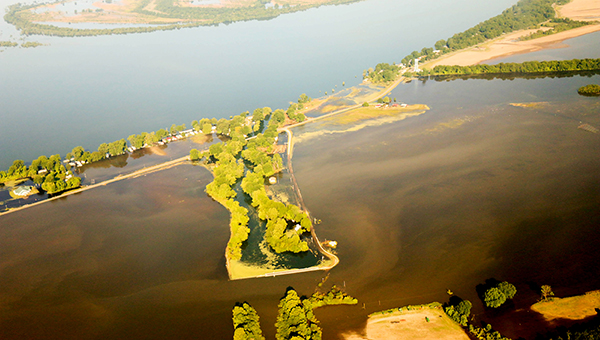 This aerial photo taken by Walter Frazier in June 2019 just a portion of the expansive flooding in the Yazoo Backwater Area. (Walter Frazier/The Vicksburg Post)

A court order to install pumps in the Yazoo River Backwater Area is one of the remedies sought in a class-action lawsuit filed against the U.S. Army Corps of Engineers in federal court.

The suit, styled “Alma Wilson, Glenn Haden, Travis Cockrell and Cranford Upton v. The United States of America” was filed Sept. 18 in the U.S. Court of Federal Claims in Washington, D.C. No trial date has been set.

Besides the pumps, the suit seeks unspecified compensation for damages caused by the historic 2019 Yazoo Backwater Area flood — often referred to as the Forgotten Flood — leaving amounts to be determined by the court.

The suit comes as the U.S. Army Corps of Engineers Vicksburg District is receiving public comments for its Supplemental Environmental Impact Statement recommending installing a pump station on Deer Creek.

“The pumps, as we understand it, are the answer to the problem because the Corps doesn’t have to wait until the Yazoo Basin fills with water,” he said. “As the water begins to build, they can begin pumping. It’s a gradual process of keeping the watershed dry. The level on the river that would be increased is non-existent.”

“The secondary issue is to get people compensated for what happened in 2019,” Pendley said. He said the suit could be amended if the area is flooded in 2021.

He said the decision to make the U.S. the defendant came after discussions with people at a March 2019 meeting in Vicksburg about the suit.

He said the Corps or the Environmental Protection Agency could be named specifically as the case proceeds.

Pendley said the suit was filed in the Court of Federal Claims because it involves the appropriation of land by the federal government without compensating the landowners. He said the hearing will be a bench trial.

The idea behind the suit, he said, “Is to get started somewhere and try and get this (the pumps) accomplished. As we see it, it wasn’t so far-fetched, because the original plan, the original project, included the pumps.”

The pumps are expected to move 14,000 cubic feet of water per second from the land or Delta side of the structure to the riverside if and when the Steele Bayou Control Structure gates are closed due to high river stages.

Designs had it protecting about 630,000 acres in the South Delta from flooding. Flooding to residential and non-residential structures in the Delta would be reduced by 68 percent when the pump station is completed, according to a report from the Corps.

The project took on new life during the devastating flood in 2019.

Flooding in the Yazoo Backwater area covered land in the Delta for 219 days and reached a record level of 98.2 feet during the 2019 flood, covering 548,000 total acres of land including 231,000 acres of cropland.

The flooding inundated the Eagle Lake community, forcing many residents there to leave their homes and evacuate to other areas. The water also overtopped Mississippi 465, Mississippi 16 and Mississippi 1.

Many of the backwater residents and local officials blamed the EPA’s decision to veto the construction of the pump station, which was to be built on the Steele Bayou Control Structure to help protect the South Delta from flooding.

According to the suit, “Inclusion of the pumping system was necessary to the Yazoo Backwater Project for periods when events of heavy rainwater coincide with high flood stages along the Mississippi River. In this situation, without the pumps, the Yazoo Basin essentially becomes a bathtub with no effective drainage mechanism.”

The suit claims the design, construction, and subsequent operation of the Yazoo Backwater Project and the Steele Bayou Control Structure by the Corps “resulted in the direct, natural and foreseeable flooding of Plaintiffs’ property.” Routing the drainage of the entire Yazoo Basin to the Steele Bayou Control Structure, the suit continued, “Created a massive pool of water for which there was no drain.”

Had the Yazoo been able to drain naturally or the pumps been installed or natural drainage routes been built, according to the suit, “The current flooding and taking of plaintiff’s property would not have occurred.”

The plaintiffs would have been better off and the flooding not occurred “with no intervention from the defendant,” the suit claims, adding without the Backwater Project, “the floodwater would have continued to drain naturally into the Yazoo River.”