Sheriff plans to continue search for hunters on Christmas… 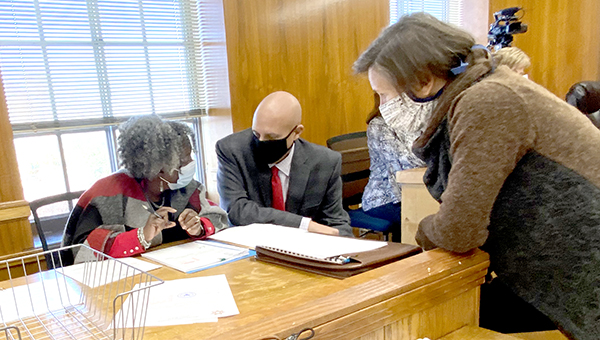 Ed Herring is not the man he once was. There have been changes to his appearance; his head is now bare and he walks a little more cautious.

Today, Herring is a few pounds lighter, but while his months-long fight against cancer has left his body weakened, it has strengthened his commitment to his family, his community and his faith.

In September, Herring, who serves as District 1 Supervisor on the Warren County Board of Supervisors, was diagnosed with Hodgkin lymphoma, a cancer that spreads through the lymph vessels from lymph node to lymph node.

Initial CT scans of Herring’s chest showed the disease around the heart, making treatment problematic and dangerous. Days later, when a more detailed Positron emission tomography, or PET, scan was performed, did the scope of the disease truly show itself.

“My heart sunk seeing how bad it was,” Herring said. The scan showed not only had the disease attacked the area around Herring’s heart, causing severe chest pains, but it took up a large section of his chest. It was declared as stage 2 cancer. “It was three times the size that we had first thought,” he said.

That scan was performed at St. Dominic’s, where Herring has been receiving treatments since, and where he has been under the care of oncologist Dr. Guangzhi Qu.

Herring said it was that first meeting with Dr. Qu, in September, that not only set out the plan for his treatments but made him feel comfortable with the plan of attack.

“He walked in, sat down and said, ‘I don’t know if you are a believer, but if you believe in God, I and God are going to cure you,'” Herring said. “He had me.”

From there, Qu laid out the treatment that included aggressive chemotherapy to knock out the cancer.

Just before Thanksgiving, Herring saw the results of his latest scan that showed he was much improved. The cancer was all but gone, but there was plenty of work left to do.

“Dr. Qu took me back to that room and just laid the two scans down, sided by side,” Herring said. “All you could do — all I could do — was tear up.”

Herring, who has slowly started to return to work in his role as a supervisor, coming to work sessions and meetings, as well as fielding a few calls, said the fight has been one he did not expect.

“After my first treatment, I was hard-headed and thought that I would be up and about in a couple of days. I was wrong. It zaps you,” Herring said. “Every bone, every joint hurts so bad. I want to walk, I try to walk and stay active, but man it hurts so bad some days all I want to do is just lay there. And that is the worst thing you can do.”

And it was those effects of the chemotherapy treatments that brought Herring to his lowest points.

“About a month or so in, there were days I would hurt and feel so bad in my chest, that I would start thinking that it wasn’t working, that the cancer was growing. It’s getting harder to breathe, taking more energy to walk to the kitchen. There were those times, when I would think ‘Please Lord, please make this be worth it,'” Herring said. “I had almost made up my mind, from feeling so bad and hurting so much, that if the chemo wasn’t working that I don’t want it anymore.”

But while the treatments have brought him to the low points, it has been the support from his family, friends and the community that have pulled Herring through. He said that each of his children, Laken, 22; Reece, 16; and Addie Brookes, 8, along with his ex-wife, Stacy, have all taken on important roles in his treatment.

Herring said his son has been his primary driver, while his youngest, Addie Brookes, was disappointed to learn that Herring did not look like her hero Jason Statham when his hair was shaved off.

“This has been a blessing because not only has it taught me more about myself and how much my family is committed but how much this community loves each other. They really do,” Herring said, recalling all of the phone calls, texts and cards he has received encouraging him during his fight. “We all give each other a bad rap sometimes because we vote this way or that way, I can tell you the support from this community has been unbelievable.”

He also said the time has given him an opportunity to reflect and forgive.

“This has given me the opportunity to, especially sitting there alone, to forgive,” Herring said. “Forgive people who have wronged me in the past, forgive people who I have held a grudge against because I felt they did one thing or another to me. It was really time to forgive.”

As he begins to look to March, when the chemotherapy treatments are scheduled to end, Herring has also looked at what this has done to his faith — faith in his family, his own personal faith and those he now shares a bond with.

Herring, who this week is planning a Christmas with his family — a holiday that was not guaranteed just a few weeks ago, credits those who — in addition to his family — have stood by his side in this fight. From the emergency room doctors who first addressed his chest pains so many weeks ago, to those administering the chemotherapy and helping fight the disease, Herring said he has been beyond blessed. He also said it is a reminder to others.

“It is so important to get checked if something does not feel right,” Herring said, remembering that he felt chest pains of one degree and another for months before his cancer diagnosis. “We all get caught up in the day-to-day grit of our lives and forget to take care of ourselves.”