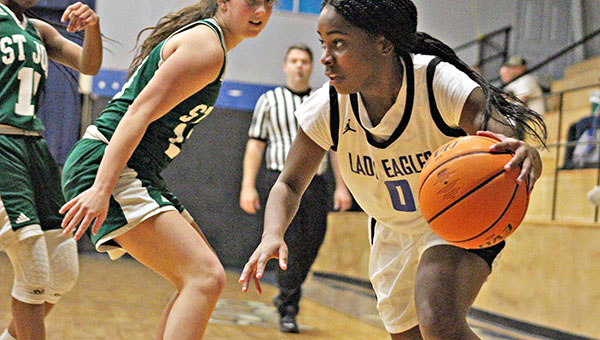 The Porter’s Chapel Academy Lady Eagles are looking forward to getting their leading scorer back in the lineup. In the meantime, they’ve managed to hold the line and win a couple of games without her.

PCA (13-5, 2-1 MAIS District 4-2A) was playing its fifth consecutive game without leading scorer Yakia Burns, who has been out because of an ankle sprain. Burns, who is averaging 33.7 points per game, is expected back for Tuesday’s home game against Benton Academy. The Lady Eagles have gone 2-3 in her absence.

“We’ve got some players that are role players, and when they play their role they do pretty good. They did a good job, they hustled, and we did enough to win a ballgame without Kia,” PCA coach Casey Fisher said. “This was a good win for us without (Burns).”

PCA trailed 22-21 at halftime Thursday, but quickly took the lead for good. Sims scored four points during a 7-0 run, Smith hit two 3-pointers in the quarter, and Olivia Masterson scored on a rebound basket at the buzzer to give the Lady Eagles a 37-27 lead heading into the final period.

“We went to a 1-2-2 zone and realized who their shooters were. We shaded to their shooters and made them get out of what they were doing in the first half, and it worked for us,” Fisher said. “We got a few baskets and got up by 10. We called a timeout and asked them to get up by 10, and they did it.”

Greenville-St. Joe only got it back to a one-possession game once in the fourth quarter, at 39-36, although it did make things uncomfortable for PCA. A swarming defense forced numerous turnovers, and Skylar Harden scored eight of her 11 points in the final period.

Poor shooting ultimately kept the Irish from making a final push toward the lead, however, and PCA did just enough offensively to keep them at arm’s length.

Sims and Smith each scored, and then Smith split a pair of free throws with 1:55 left to give PCA a 44-36 lead. Sims and Smith did most of the ballhandling down the stretch and, while they only scored on two free throws in the last two minutes, were able to dribble off large chunks of time on several trips up the floor.

“Zyer had the ball in her hands a lot, and in my experience it’s hard to hold the basketball,” Fisher said. “We saw that they couldn’t hold it, so we said let’s just get back in our offense and they executed it. We did enough to win the ballgame.”

(B) Greenville-St. Joe 58, Porter’s Chapel 28
Porter’s Chapel Academy’s boys’ basketball team had a bad night against a good team, and paid the price.

Greenville-St. Joe scored the first 17 points of the game and was never threatened while cruising to a 30-point victory over the Eagles (6-6, 1-2 MAIS District 4-2A). 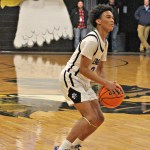 Chris Taylor scored a game-high 11 points for PCA. Lawson Shelby added eight points, but most of it came on a pair of 3-pointers in the fourth quarter after the game had long since been decided.

PCA did not score until Ricky Carraway hit a runner in the lane with 14 seconds left in the first quarter. Its next field goal was a layup by Shelby with five minutes left in the second that made it 21-5. Greenville-St. Joe scored six points in a row after that, pushed its lead to 33-10 by halftime, and continued to pull away in the second half.