Students raise new state flag in front of their… 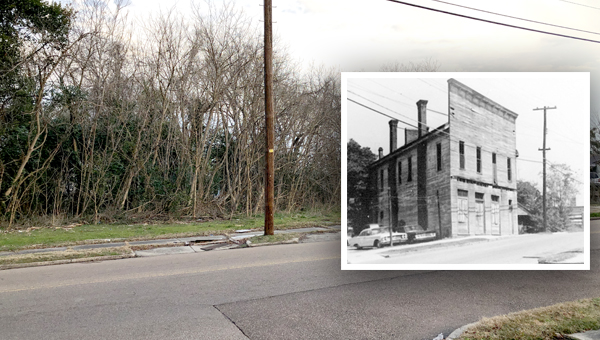 This impressive two-story building at 1317 on the northwest side of Openwood Street between First East and First North streets housed Zollinger’s Grocery on the first floor in the early 1880s.

The second floor was used as the residence for Valentine Thomas Zollinger and his brother, John Frank. They were joined by their mother, Anna, after her house, located near the city cemetery, burned in February 1884. Their father, also named Valentine, was a meat merchant and butcher with his primary business being located on Levee Street as he was a steamboat butcher in the 1870s. He died at 45 years old during the Yellow Fever Epidemic of 1878.

Anna married sometime afterward to a Mr. Webster who passed away before the 1884 fire. In October 1887, Anna adopted one of two children left homeless when their mother, Mrs. Mary Brown, died in the state hospital. The other baby was adopted by a woman, only identified as Mrs. Enwine.

The Vicksburg Commercial Herald reported that “the gentleman whose untimely demise is now mourned by so many had resided in Vicksburg only a short time, comparatively, but had won numerous friends. His marriage to Mrs. A.M. Webster, now his bereaved widow, only a few months ago, was the occasion of many felicitations.”

J.F. Zollinger operated the grocery store and V.T. Zollinger was a concrete contractor who built bridges, sidewalks and roads throughout Warren County.

In 1923, he built roadways within the city cemetery at the same time that the fence was being erected around it. J.F. was a member of the board of directors of the Retail Grocery Association in 1904 and was still in business in the Openwood store in 1935.

The building was rented for many years and was vacant in the 1960s and is today an empty lot.