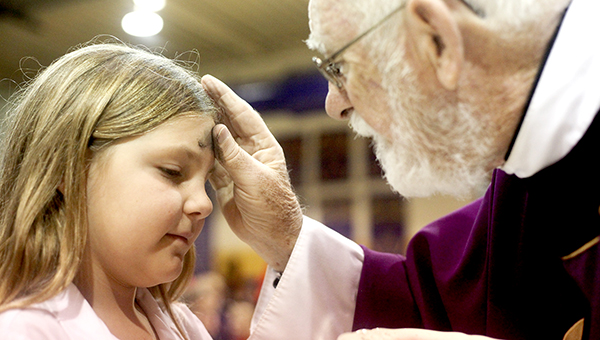 Concerns over COVID-19 are causing some local pastors to consider how to safely continue their church’s Ash Wednesday traditions.

Ash Wednesday, which is Feb. 17, marks the beginning of the Christian season of Lent, the period of sacrifice and atonement to prepare for Christ’s resurrection on Easter.

The day is marked by church services that include the traditional placing of ashes on the foreheads of parishioners. But amidst fears over the potential spread of COVID-19, many pastors and the governing authorities for their faiths are looking for ways to provide meaningful services and fulfill the tradition of placing ashes.

The Rev. Andy Andrews, rector of The Church of the Holy Trinity, and the Rev. Sam Godfrey, rector of Christ Episcopal Church, said the Episcopal Diocese of Mississippi has not yet provided guidelines for Ash Wednesday.

“I’m not sure how they will be imposed, but we are going to have a service either indoors or outdoors — whatever our diocese deems safe — and this is going to be 40 days of revival and renewal,” Andrews said.

Godfrey said the state’s rectors participated in a  Zoom meeting with the Right Rev. Brian R. Sage, bishop of the Episcopal Diocese of Mississippi, Wednesday but a decision on Ash Wednesday was not made.

“We’ll know more next week,” he said. “He’s watching the numbers; we’re kind of in a wait-and-see.”

“We will have a service; what it will look like will depend on the situation at the time. I’m hoping I’ll have people there.”

The Rev. Kevin Bradley, the pastor of Crawford Street United Methodist Church, said the church has always held an Ash Wednesday service in the evening.

“We’re going to be doing something,” he said, adding the church has suspended in-person worship, which was recommended by the Mississippi United Methodist Annual Council.

“We’re going to look at some creative ways to celebrate Ash Wednesday that are also complying with our current suspension of worship,” he said.

The Rev. Austin Hoyle, the pastor of Hawkins United Methodist Church, said the church has not yet planned an Ash Wednesday service.

“We’re probably going to do something, we’re just not sure what,” he said.

The Catholic Diocese of Jackson, which governs Vicksburg’s three Catholic Churches, has not addressed Ash Wednesday, but the Vatican has issued guidelines outlining how priests can distribute ashes.

According to an article from the Catholic News Agency, the Congregation for Divine Worship and the Discipline of the Sacraments published a note on Jan. 12, directing priests to say the formula for distributing the ashes once to everyone present, rather than to each person.

According to the note, the priest “addresses all those present and only once says the formula as it appears in the Roman Missal, applying it to all in general: ‘Repent, and believe in the Gospel,’ or ‘Remember that you are dust, and to dust you shall return.’”

The priest then cleanses his hands, puts on a face mask and distributes the ashes to those who come to him or, if it is appropriate, he goes to those who are standing in their places. The Priest takes the ashes and sprinkles them on the head of each one without saying anything.