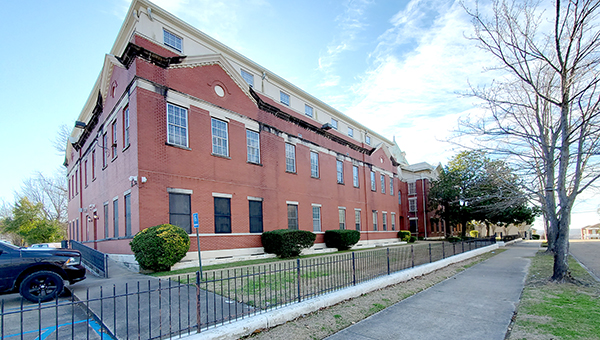 The Warren County Jail is located at the corner of Cherry and Grove streets. (John Surratt/The Vicksburg Post)

When they get ready to design a new county jail, Warren County Sheriff Martin Pace is asking supervisors to avoid building a multi-story facility.

“Any time you have a multi-story building you’re getting into all kinds of problems,” Pace said. “The ideal structure is a single-story facility with everything on one level and the ability to build additional wings so you can add to it in a cost-effective, secure way.”

Pace met with the Board of Supervisors Monday to discuss the county’s present 114-year-old jail and give his thoughts on building a new facility. The previous board set the wheels in motion to build a new county jail and purchased a 47-acre tract off U.S. 80 to build it. The present jail is a multi-story building, with male inmates on the second floor.

“A county jail for the criminal justice system is what an emergency room is for the medical system,” Pace said. “We get everything.”

Under state law, he said, the jail is responsible for holding felon and misdemeanor offenders awaiting trial, providing sentence housing for misdemeanor convictions of up to one year, and holding convicted state inmates until they are transferred to the state prison system.

“What we currently have is a situation where we can only house pretrial felons,” Pace said. “We don’t have the room to house anybody else. We have beds available for 92 inmates.”

As of Thursday, Pace said the county jail had 98 inmates — 17 of those are people convicted of felony crimes. He said the Mississippi Department of Corrections is on lockdown because of COVID-19 and is not picking up new prisoners.

He said the jail has 128 beds but 36 cannot be used. One 20-man cellblock is not useable because the cell locks do not work, and a 16-man cellblock can’t be used “because the plumbing fell out.”

“One of the things the jail does not have is the ability to classify inmates and house them based on behavior,” Pace said, pointing out a person may be charged with a nonviolent offense like auto theft “and they may be the worst-behaved inmate in there.

“It’s counter-productive to house someone based on charge,” he said. “We have to house based on whether felony or misdemeanor, but ideally, we would have someone go to a classification cell so we can find out all we need to know about this person and then place them into a housing pod that would fit the others in there.”

And there need to be sufficient beds. Pace said studies recommend 300 to 350 beds, adding that with the present population of the jail, “We have a couple of guys sleeping on tables. If I have a serious problem with an inmate and I have to move that inmate, then someone has also got to be moved. We need space to move around.”

He said the jail also needs different levels of security from minimal to high risk.

“Our current jail doesn’t have that; either you’re in jail or you’re on the street. There’s no in-between,” he said.

Also needed would be a medical area to separate potentially sick inmates for observation. Having a medical area would allow an inmate to be observed for illness before they are released in the general jail population.

“That would be positive whether you’re talking about COVID, or the flu or a stomach virus,” he said.

When the time comes to build a jail, Pace recommended the supervisors “Deal with people who have actually built county jails.

County jails, he said, “Have continuously moving security issues; everybody that gets tangled in the criminal justice system.

“Whatever is built, I would strongly suggest it be built in such a fashion that additional space can be added at a later date which is cost-effective and safe.