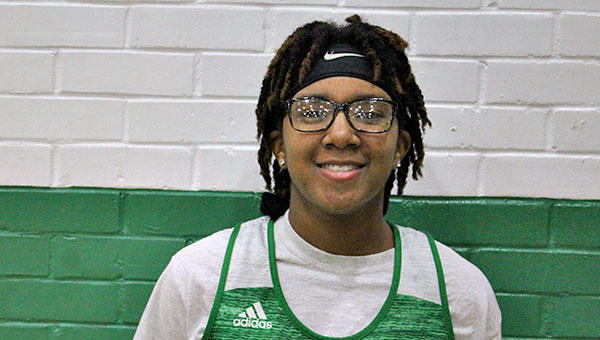 Vicksburg High basketball player Destini Sims made five 3-pointers and scored a game-high 25 points in a 75-48 win over Callaway on Friday.

Nobody’s perfect, but the Vicksburg Missy Gators are at least halfway there.

Destini Sims made five 3-pointers and scored a game-high 25 points, Layla Carter dropped in 20, and the Missy Gators clobbered Callaway 75-48 on Friday night to remain undefeated in MHSAA Region 4-5A at the midway point of the league schedule.

Vicksburg (12-5, 3-0 Region 4-5A) swept the season series from Callaway (0-6, 0-3) and beat the Lady Chargers for the ninth consecutive time. Vicksburg also won for the ninth time in 10 games overall this season.

Janiah Caples added 10 points for the Missy Gators, who led by eight points at halftime and then outscored Callaway 19-8 in the third quarter to take firm control of the game.

Carson Carter scored 10 points in the first quarter as Simpson jumped out to a 24-3 lead and was never threatened. Carter finished with 16 points, and Maddie Craft scored eight.

Boys
Callaway 75, Vicksburg 60
Vicksburg nearly upset Callaway 10 days ago in Jackson, but didn’t come nearly as close in the rematch and lost to the Chargers for the 19th time in 20 meetings.

Jaden Williams led Vicksburg (9-6, 1-2 Region 4-5A) with 16 points, and was one of four players in double figures. Keshawn Brown scored 13 points, while Kameron Brown and Sean Hardy had 12 apiece.

Smith made five of his 3-pointers in the second quarter, when Simpson outscored St. Al 38-12. That gave the Cougars a 63-22 lead at halftime.

Isiah Thomas led St. Al with 20 points, and Padre Gray had 16. The rest of St. Al’s roster only made one field goal combined.