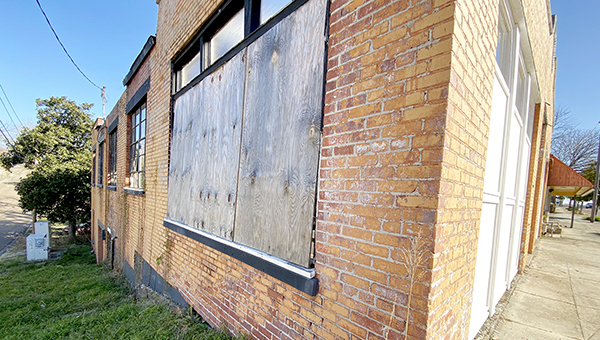 The city of Vicksburg is seeking permission from the Legislature to create an ordinance that would allow the city to inspect vacant buildings within the city limits. This building — located at Locust and Clay streets — is among the vacant commercial buildings in the city. (Tim Reeves/The Vicksburg Post)

If you own a vacant commercial building in the city of Vicksburg, city officials are wanting more information from you.

The Board of Mayor and Aldermen will likely approve a local private legislation that will be presented to the Legislature that would allow the city to establish a “Vacant building registration ordinance.”

South Ward Alderman Alex Monsour said the ordinance is far more important than just a listing of vacant buildings and owners, but rather a crucial public safety measure needed in Vicksburg.

“We are wanting to do this for public safety. We want our fire department — our first responders — to have a floor plan of vacant buildings,” Monsour said. “We need to know all of the access points and entries, we need to know the person we need to see and know that there is insurance on the building.

“If it is a vacant building, then there is no one there. If it catches on fire, our guys need to know what they are looking at, what they may be dealing with.”

While the details of the ordinance have not been established, the legislation that will be presented to state lawmakers if the board approves Tuesday does give a general outline of what a final ordinance would require.

The ordinance would require a property owner to register the building after a “period of vacancy,” provide building plans, provide a maintenance plan, provide for annual inspections and proof of insurance.

The proposed local and private legislation would also “ensure a minimum standard of maintenance, foster an increase of stabilization of property values, reduce blight, foster economic development and preserve the built environment.”

Monsour said that when the legislation is approved by the Legislature, the city can finalize the details of the ordinance and establish all of the guidelines.

“This ordinance will allow us to gain access by knowing who the key person is and that they have their insurance updated at all times if something happens. We don’t want a vacant building — and then someone not has insurance on it — and then it burns down and burns down the one adjacent to it,” Monsour said. “The full details of the ordinance will be developed later, but this simply gives us permission to move forward on it.”