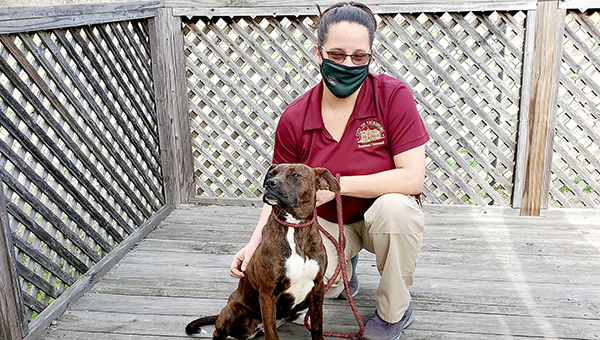 At one time in 2020, the Vicksburg Animal Shelter had 40 rabbits.

“We seized that many rabbits (from one owner); there were probably more than that,” Animal Shelter Director Kacie Lindsey said. “It was a crazy situation.”

The rabbits’ owners, she said, had too many rabbits and the pen holding them was too small.

“They started off with two rabbits and one escaped and came back pregnant and it went from there,” she said, adding the population in the small enclosure increased from two to 40 over four months —from June to October.

The rabbits were part of the 1,012 animals taken in by the animal shelter in 2020. That number also includes four horses, two guinea pigs, 10 hamsters and one chicken.

A total of 427 animals were adopted in 2020, including the chicken, hamsters, rabbits and horses.

An additional 354 animals were pulled by rescue organizations and taken to animal rescue centers in the northern U.S., 76 were claimed by their owners, 99 euthanized, and eight animals, including one puppy, escaped, leaving the shelter with 29 animals at the close of 2020.

The low numbers, however, have since pushed back up.

In an attempt to reduce the number of animals in the shelter, shelter staff announced an adult dog special through Feb. 5, where an adult dog can be adopted for $60. The shelter is also offering a special adoption fee on cats and kittens — two for $60 — through Feb. 5.

Anyone interested in adopting an animal can call the animal shelter at 601-636-6982.

According to the year-end report, the majority of the animals at the shelter in 2020 — 664 — were picked up by the shelter’s animal control officers, either from people who called the shelter to come and get their pet because they either could not care for or no longer want the animal, or the animals were strays picked up off the street.

Ninety-nine animals, like the rabbits, were seized because they were either abandoned or neglected by the owners. The horses were part of a larger seizure early in 2020.

The largest number of animals — 504 — at the shelter was surrendered by their owners. The hamsters and the guinea pigs were owner-surrendered animals.

Owner-surrendered animals are put up for adoption immediately, Lindsey said.

“We made good progress last year and only had about a 10 percent euthanasia rate,” Lindsey said. “We never had to euthanize because of space, thanks to the rescues and adoptions that we had.”