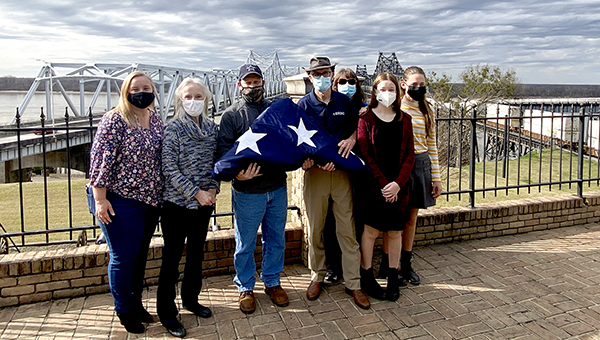 Sponsored by the Coleman family to honor their husband, father and soldier, the flag will fly over the bridge for the next three months.

Coleman, a graduate of the U.S. Military Academy at West Point, served in all components of the Army including active duty, the Mississippi National Guard and the Army Reserve. He commanded at the platoon, company, battalion, group and brigade level culminating in 38 years of service before retiring in 2004 at the rank of major general as the Commander of the 412th Theater Engineer Command in Vicksburg.

“We thought this would be a great way to honor him,” his eldest son, Richard E. Coleman Jr., said. “He loved his family, his country and his community. Seeing that giant flag fly in his honor is very special.”

An American flag has flown over the bridge since 1994 when Blanche Millsaps of Vicksburg started the project. Upon her death in 2011, the Army-Navy Club took over the responsibility.