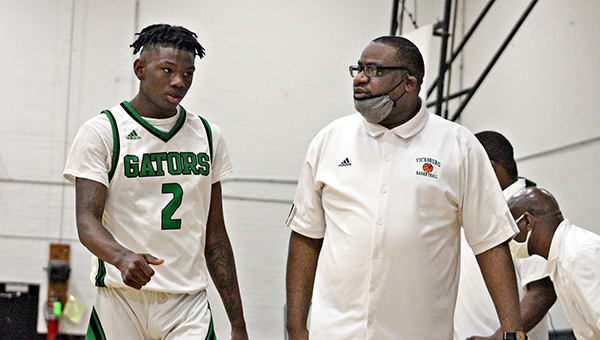 Vicksburg coach Kelvin Carter, right, talks to Keshawn Brown (2) during a Region 4-5A tournament game against Provine. Vicksburg will host Saltillo in the first round of the MHSAA Class 5A playoffs Thursday at 6 p.m. (Ernest Bowker/The Vicksburg Post)

Vicksburg High and Warren Central will have to wait a couple of extra days to begin their basketball playoff runs.

First-round games involving the boys’ basketball teams from both schools, originally scheduled for Monday night, have been postponed because of the winter storm descending upon Mississippi.

Warren Central travels to Olive Branch, while Vicksburg hosts Saltillo for their first-round games in the MHSAA Class 6A and 5A tournaments, respectively. Both games have been rescheduled for Thursday at 6 p.m.

Vicksburg’s girls’ team earned a first-round bye in the state tournament and will host either Grenada or Neshoba Central Friday at 6 p.m.

A total of 120 tickets will be available for the VHS vs. Saltillo boys’ game, and will be sold on gofan.co. The game will also be live streamed on the NFHS Network. The game will be played at Vicksburg Junior High.

The postponement means the winners of Thursday’s games will have a quick turnaround for Round 2. Second-round games are scheduled for Saturday, and both Warren County teams would have long road trips.

Warren Central would play at Southaven in the second round, and Vicksburg would go to Holmes County Central if they win Thursday.

Vicksburg coach Kelvin Carter said the lack of practice time caused by the weather — practice is also canceled as long as schools are closed — was as much of a challenge as the possibility of playing two playoff games in 72 hours.

“It’s really tough, because we don’t even know when we’re going to be able to practice again because of the weather. The next time we play might be the next time we get on the court,” Carter said after his Gators lost 79-73 to Callaway in the Region 4-5A championship game last Friday. “But if we can prepare, we’re going to prepare. I’m studious when it comes to film. I’ve got three or four films on everybody we’re going to play. I’ll get them prepared. We’re at home, so that’s the good thing. Hopefully we can go get it done and move on.”