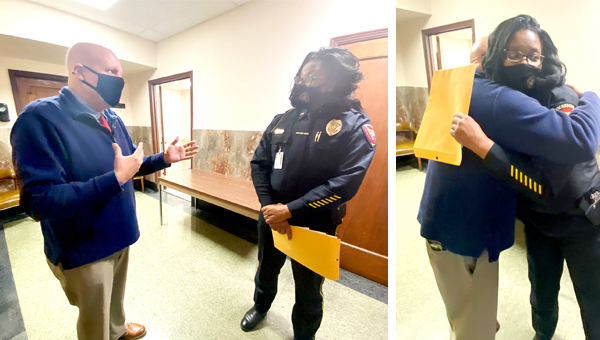 It is not very often an experienced law enforcement veteran such as Vicksburg Deputy Police Chief Penny Jones is left speechless and brought to tears. Monday, she was left both speechless and asking for a few minutes to gather her emotions.

Jones has seen a lot of things in her 20-plus years with the Vicksburg Police Department — both good and bad. She has worked countless domestic violence calls, calls for rape and abuse and calls she would rather forget.

But instead of putting those cases behind her, she is driven now to making sure the female victims of domestic violence, rape, sex trafficking and other offenses have a place to rebound and reshape their lives.

That project — The Penny Center — is a non-profit formed in 2019 which Jones said will be a “center for battered women and women of sex trafficking to help rebuild their lives, to learn how to write resumes, learn how to work a computer,” she said. “I am also going to work with the housing authority to find them housing. It will have an array of things they will learn and set up on a weekly basis where they can graduate from one thing to the next.”

While the center, which will be located in a former convenience store on Sky Farm Avenue, is still a work in progress with construction needed to bring the project’s concept to reality, it is a project that comes from Jones’ experience.

“I have been with the police department for 21 years and have had the opportunity to lead the domestic violence division,” she said. “I have seen this on a daily basis. I know the need for something like this in the community.”

Jones took ownership of the facility in late 2018. It was a gift to Jones from the previous property owner, but there was a hiccup that nearly cost Jones and her non-profit dearly.

At the time of taking ownership of the property and closing on the acquisition, Jones said she was unaware of who would be responsible for the 2018 property taxes. In the end, she was the one responsible.

And the 2019 property taxes could not be deferred because her non-profit status was not completed until midway through the year.

Monday, Jones approached the Warren County Board of Supervisors asking if they could defer her 2018 and 2019 property taxes. State statute did not allow them to do so. The 2020 taxes were not an issue as her non-profit status had been well-established.

That was until District 1 Supervisor Ed Herring spoke up.

“Oh my God,” Jones said, instantly trying to hold back tears. “I have no words,” she said.

“Thank you for what you are trying to do,” Herring said.

“Wow,” said District 3 Supervisor Shawn Jackson, echoing the surprise of the other board members. “What a lovely thought,” Board President Dr. Jeff Holland said.

Following that portion of Monday’s meeting, Herring and Jones met briefly outside the meeting room where Herring told Jones he would contact others in the community to try to find the money to pay for the 2019 property tax obligation.

“I know what you are going through,” said Herring, who had once chaired the board for Jacob’s Ladder. “Give me some time to help you. I have friends who have resources. Before you pay those 2019 taxes give me a little bit of time to see if we can help you. I think we can.”

Those words proved prophetic as Tuesday morning, Herring said he had received contributions from others to cover her 2019 tax obligation. “Now, it’s about getting her some start-up cash,” he said.

“If you wish to help mail your donation to the Warren County Board of Supervisors, 913 Jackson St., Vicksburg, MS 39180,” Herring said on social media Tuesday. “Make checks out to The Penny Center or Penny Jones and I will get them to her.

“I could speak to this for hours but let’s get her up and going then we can all speak to her success and safe refuge for these women,” Herring wrote. “Thank you and truly God has Blessed us!”

With the 2018 and 2019 tax burdens off her shoulders, Jones said she plans to invest the money she would have spent on property taxes on building materials and construction costs.