Anderson’s big night propels Gators past Saltillo in 5A… 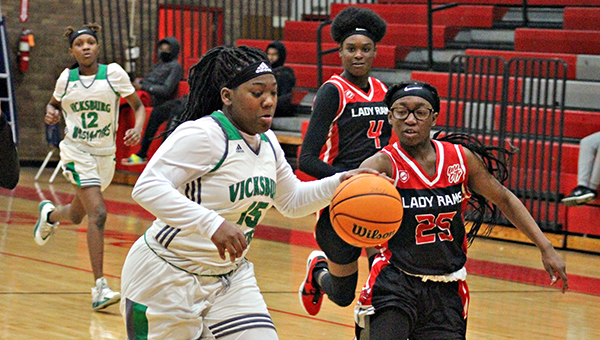 Vicksburg’s Sha’Kora Knight (15) drives past Provine’s Genesis James (25) in the MHSAA Region 4-5A tournament championship game. Vicksburg will host Neshoba Central in the second round of the Class 5A playoffs Wednesday at 6 p.m. at Vicksburg Junior High. (Ernest Bowker/The Vicksburg Post)

For the second year in a row, the Vicksburg Missy Gators are MHSAA Region 4-5A champions and dreaming of a state championship run. That’s just about the only thing that’s the same as last year, however.

The Missy Gators replaced four starters as a large group of talented underclassmen took on bigger roles this season. It all came together with a dominant run through the regular season and region tournament that was capped off with a 64-41 rout of Provine in the championship game on Feb. 12.
With all of the turnover in the lineup, coach Troy Stewart said this year’s run has been just as enjoyable as last year’s that ended a 21-season championship drought.

“This is a goal. The personnel makeup is totally different this year. We lost those three seniors we lost last year and (Yakia Burns) at the beginning of this year, and that’s four of your starters gone,” Stewart said. “This unit has dug in, they’ve bought in, they believe in what we’re doing, and they were the ones that got this done. I’m extremely proud of them. We want another one of those magical rides, because in my eyes if we get there again it’s another magical ride simply because of the different personnel makeup.”

After winning the region title last season, the Missy Gators went on a magical ride indeed, by going all the way to the Class 5A semifinals for the first time in a generation. Their long absence from the deep water of the playoffs made that run an unexpected one, but this time they’re entering the state tournament as one of the favorites.

Vicksburg (16-5) won all seven of its region games this season by double figures. Only one was by less than 19 points. After a slow start in the tournament championship game against Provine — the Missy Gators only led 7-5 at the end of the first quarter — they built a 20-point lead by the midway point of the third quarter and were never threatened in the second half.

Sophomore Layla Carter led three players in double figures with 16 points. Kalia Bland scored 13 and Janiah Caples 10. All three — as well as several other key players — are sophomores, which spoke to both the promising future of the program and the uncertainty entering this season. The only senior on the roster is guard Sha’Kora Knight.

While all of the underclassmen have played well, Stewart admitted there were questions about how they’d handle it.

Now, a few months later, the Missy Gators are once again region champions. They earned a first-round bye in the state tournament and will host Neshoba Central Wednesday at 6 p.m.

The game was originally scheduled for last Friday, but, was then postponed by the massive ice storm that hit the state. When they tip off tonight, it will be Vicksburg’s first game action in 10 days.

Stewart said the bye and a couple of extra days rest was welcome, even if the weather made preparation and practice difficult.

“It may hinder us, the coaches, from going out to do a scouting job, but other than that it’s a great feeling,” he said after beating Provine. “We’ll have an opportunity to go see who we’re going to play, watch them in person rather than on film, and give us a couple of extra days to get prepared and for my girls to get healthy.”

Stewart added that he was proud of his players not just for winning, but with how they’ve won. From the loss of four starters, to avoiding the COVID-19 issues that plagued other programs, the Missy Gators have handled their business well.

“I’m ecstatic. I’m happy for the ladies,” Stewart said. “With all the adversity we’ve seen this year with losing people, graduating people, COVID, things of that nature, I’m just so glad we could persevere and make it through. I’m extremely proud of the ladies.”

NEHSOBA CENTRAL AT VICKSBURG
• Wednesday, 6 p.m.
• At Vicksburg Junior High
• MHSAA Class 5A girls basketball state tournament, second round
• A limited number of tickets are available and can be purchased online only at gofan.co