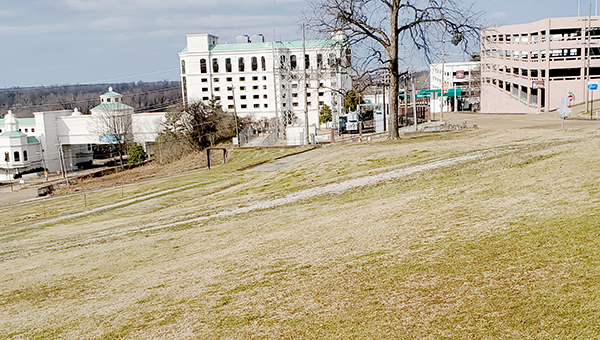 A Ridgeland company is considering a $10 million to $11 million investment to build condominiums on two pieces of property in Vicksburg’s downtown district.

The Board of Mayor and Aldermen Thursday approved a resolution declaring the Washington Street Park property and property adjacent to and north of the Vicksburg Convention Center surplus property. It then approved a real estate sale and development agreement with MidSouth Companies LLC of Ridgeland for the properties.

Mayor George Flaggs Jr., however, said the board’s action does not mean the company will begin construction anytime soon.

“This just allows them to do due diligence,” he said, “But if it looks like that it is of the value that it seems to be, it will go forward.”

Flaggs said MidSouth has six months under the terms of the real estate agreement to inspect the properties and determine whether the project is feasible. He said the board discussed the project at an executive session during Monday’s board meeting. The state’s Open Meetings Law allows public bodies to go into executive sessions to discuss real estate matters.

If the company decides to build the condominiums, the project is projected to bring in an estimated $157,000 annually in property taxes as well as an estimated $5 million in payroll, construction material purchases and sales tax.

According to the sales and development agreement, the project will result in the construction of about 20 condominium units on each property.

City Attorney Nancy Thomas said the real estate sales and development agreement is allowed under a provision in state law that lets the board determine that the investment, potential revenue, payroll, increased population and increased “foot traffic” in the downtown area and blight elimination is “fair and valuable consideration” for conveying the land.

Developed at a cost of $146,538, Washington Street Park is a multi-use park at the corner of Jackson and Washington streets that feature a stage and sidewalks. It has served as the site for the Vicksburg Farmers Market, Christmas in the Park and other events.

Flaggs said the city is looking at some areas north of the Yazoo and Mississippi Valley Railroad Depot as possible sites to relocate the park and its clock and monument dedicated to outstanding citizens.

“There’s some property on the Mississippi that the county owns and a private person owns,” he said. “In addition to the improvements the cruise ships are making, I’d love to put it there as a part of the riverfront development.”

The Mulberry Street property was designated in 2018 as the site for the Mississippi International Arts Pavilion, a building featuring approximately 20,000 square feet of gallery space to show international works of art.

In the 1860s, it was the site of the A.M. Paxton 1860s foundry that made cannon parts. Some of the foundry’s walls face South and Mulberry streets and one of its doorways faces South Street.