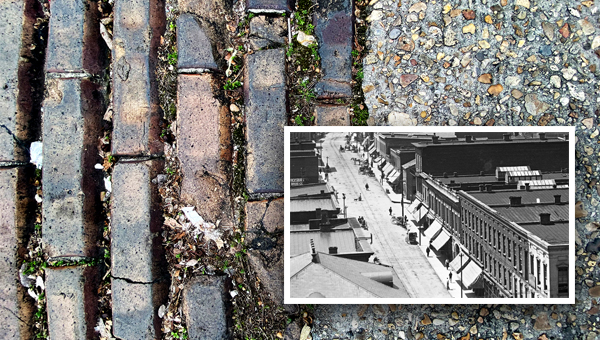 Vicksburg is known for its historic buildings that help tell the city’s history.

But there is another symbol of the city’s history that hardly ever gets a second glance and it’s always underfoot.

Vicksburg’s brick streets are as much a part of history as its buildings and the monuments at the Vicksburg National Military Park, and a unique feature of the downtown area.

Although many of the city’s streets are now paved with more available materials like asphalt and concrete, the brick surfaces that recall the city’s bygone years are still visible on sections of Crawford Street, South Street with its steep hill to Levee Street, Farmer Street, Jackson Street and Grove Street.

But those streets show only a portion of the bricks that covered the city. The rest of them are close by under layers of asphalt.

The evidence of that, Vicksburg Public Works Director Garnet Van Norman said, is exposed every time the city resurfaces a downtown street.

“On a lot of these (street) paving projects, when we’ve milled the asphalt off to put it (the pavement) down, they’ve shown the brick streets. Of course, the milling machines cut them up,” he said.

Vicksburg’s brick streets go back to the early 1900s, Van Norman said, adding, “Before then, it was either planks, wooden blocks or dirt.

“They (work crews) would mix concrete for a base and then put sand down and then put the brick on top of the sand with granite curbs and sweep the sand back into the cracks.

“The brick on the inclines were built so the horses’ shoes and hooves could pull up the hills. They were called hillside bricks,” he said.

The bricks were laid flat in the street with a “V” on the corners so the horses wouldn’t catch a brick on a shoe or hoof and pull the brick out of the street.

For many years, bricks were the primary material for streets until asphalt, a petroleum-based paving product, became popular and was the surface of choice.

That was until about 2002, when then Mayor Laurence Leyens and his administration decided to repave Washington Street from Veto Street to Grove Street with bricks.

“It’s a standard paving brick,” Van Norman said. “They’re actually laid by machine. We have extra bricks for Washington Street. You can buy those, so we bought some.”

While the city’s old brick streets are a reminder of its past and an interesting feature of the city, Van Norman said they present a special problem.

“The problem with the brick streets in this day and time, they get real slick during rain and they’re not the safest in the world; you can’t stop on them,” he said. “We’ve had trucks spin around in circles going down South Street.”

But they are also a part of the city’s heritage and something to be preserved. And Van Norman said city workers will continue working to keep them preserved and repaired, and will even try to find a few extra.

And that can be a problem.

“We try to replace damaged brick on the city’s remaining brick streets,” he said. “We pull out, we try to save the brick. We have very few left. When something happens for some reason, when we’re digging them up (during paving projects) we try to save as many as we can. You can’t buy them; those old bricks were specially made.