Profile 2021: Vicksburg at the forefront of world-class digital… 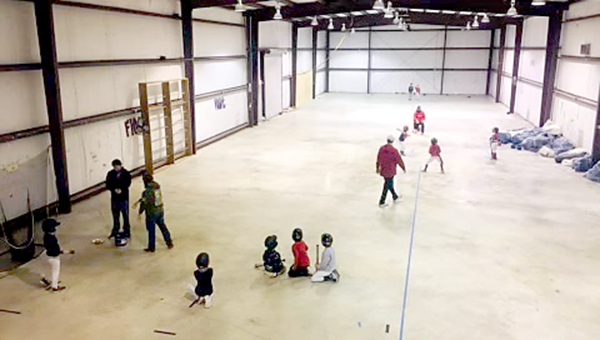 Young baseball players go through workouts in the former Gymsouth facility on Wisconsin Avenue. The building is being converted into The Sandlot, an indoor sports facility that is expected to open in May. (Submitted Photo)

Starting a new business is exciting. Knowing it will offer the community an opportunity at something that Vicksburg has never had before makes the feeling even better.

The Sandlot will offer a range of enhanced sporting activities, from private baseball lessons to agility classes and sports camps.

“We will offer instruction in batting, how to field, how to throw — anything to do with baseball,” Brown said.

The facility will be equipped with state-of-the-art equipment and technology, Brown said, including Diamond Kinetics and Rapsodo, which is used by Major League Baseball teams to help advance their players.

Camps, coaching seminars and showcases will also be scheduled at The Sandlot.

Brown said showcases are designed for college and pro teams to come in and scope out the talent.

Brown, who is from a family of collegiate and professional baseball players and is a graduate of Vicksburg High School, will serve as the manager at The Sandlot. He will also provide private instruction.

“When I was growing up there was nothing like this (The Sandlot),” Brown said.

Waring, who played baseball at an early age and went on to play two years at Hinds Community College, a semester at Mississippi State University and a semester at Union University in Tennessee, echoed Brown’s sentiments.

“I feel like this is a need in our community,” Waring said. “Growing up we always had to drive to Jackson for lessons. And now with Sports Force here I think it will be a great opportunity.”

Tillotson is new to the baseball scene. But after her 8-year-old son began playing all-star baseball in the summer of 2019, she became interested and initiated the idea of opening an indoor sports facility.

“That fall, his All-Star team transitioned into a travel tournament team. As our time transitioned with tournament ball, the need for an indoor facility in our community became apparent,” she said. “Practice space was needed when the weather wasn’t on our side.”

In addition to baseball, The Sandlot will offer training opportunities for other outdoor sports.

“This is something that has been needed for years,” Brown said. “I just want to give kids the opportunity I didn’t have. Our kids have been left behind from Madison, Ridgeland, Pearl, Brandon, Clinton — those surrounding areas had stuff like this (The Sandlot) and it showed on the fields.”

And with Vicksburg having more professional baseball players per capita than almost any county in Mississippi — “There are about 12 of us,” Brown said — there is room for plenty more.

“We are on the map, but we just don’t have the opportunities other people have because they are training,” Brown said.

“I know the tough road it takes to get there and I want to do everything to make them productive and I love seeing kids being productive and doing things they thought they could never do,” Brown said.

Tillotson said they are hoping to open the doors in May. For more information, go to The Sandlot of Vicksburg on Facebook.