Rebels hoping win over Kentucky is the start of… 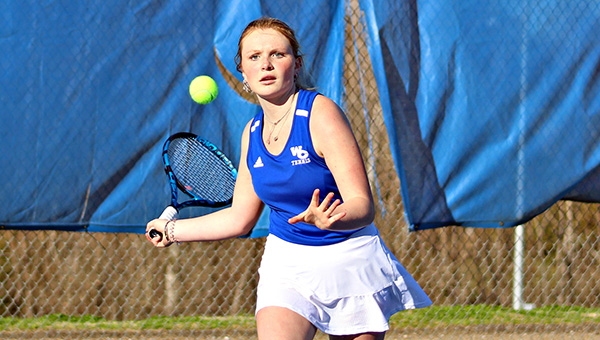 A warm, sunny day was the perfect way for Warren Central’s tennis team to break the ice on the 2021 season.

The Vikings did not lose a set in any of their five match victories Wednesday as they beat Pearl 5-2 in their home opener.

It was Warren Central’s second match of the season — it lost to Madison Central last week — but the first at Halls Ferry Park after two others were postponed or canceled because of weather and this one was delayed two days by rain. It was also the first home match since the COVID-19 pandemic ended the 2020 season a third of the way in.

“It’s a good way to open our home season. Especially this year, since I’ve got a lot of new starters. And not just for my varsity. The JV kids, for a lot of them it’s their first match play,” Warren Central coach Steve Summers said. “I’m super excited to get everything started after a third of a season last year, it’s been really good to get back out on these courts and enjoy the sun and the beautiful weather.”

The mixed doubles team of Blakeney Allen and Sarah Spires had the toughest match of any of WC’s winners, knocking off P.J. Gregory and Madi Temple 6-4, 6-4.

Summers said he was most pleased with the play of his girls’ players.

“Whatever this team is going to be able to do this year, it’s going to ride on the back of the girls,” he said. “I’ve got three seniors that have been in the program since they were in seventh grade, a junior that’s been in the program since she was in seventh grade, and my best girl is a 10th-grader. I’ve been so pleased with how they’ve competed.”

Pearl’s two wins came in the boys’ doubles matches. Andrei Gregory and Harin Rao beat WC’s Gordon Wilkerson and Wyatt Schrader 6-3, 6-4 in No. 1 doubles; and in the No. 2 position, Noah Martin and David Adams beat Tanner Garton and Sam Harris 6-1, 6-2.

The Vikings took care of business otherwise, however, and Summers added that he was happy with the way the winners finished off their matches.

“It’s great. What I’m most pleased with is, a lot of times you see a 6-1 first set and all of a sudden it’s 7-5 or 6-4 in the second. I am pleased to see we finished strong and maintained it and closed it out. That was definitely good to see,” Summers said.