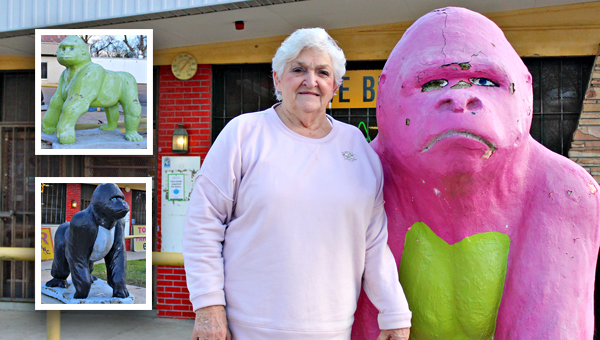 Minnie hitched a ride from Texas to Vicksburg about 25 years ago and immediately rubbed some people the wrong way.

They thought she was too loud, her appearance too garish, to remain. She clashed with the neighborhood and the city’s conservative values, her detractors said. An ordinance was even passed that was intended to run her out of town.

Minnie stayed, however. Her supporters backed her and carved out an exemption for the ordinance that allowed her to stay. Besides, since she weighs more than a ton, it was going to take a heck of an effort to get her to leave.

Minnie is one of three concrete gorillas — one hot pink, one black and the other lime green; Minnie is the pink one — that stand guard in front of Top Dollar Pawn & Guns, 3421 Washington St., at the corner of Washington and Lee streets. She and her family were brought to Vicksburg as an advertising gimmick, but eventually became one of the city’s unique landmarks.

“They have served their purpose,” laughed Joan Tremaine, the owner of Top Dollar Pawn & Guns. “A lot of people stop in because they see the gorillas. There have probably been a million pictures taken on these gorillas.”

Using the gorillas to promote the pawn shop was the idea of Tremaine’s late husband, Phil Tremaine. He had seen a similar gimmick at a restaurant in Branson, Mo., and thought it would be a good idea for his own business. He purchased them from a statuary in Waco, Texas, and hauled them to Mississippi himself.

“We hauled them on a trailer that holds 2,500 pounds, and each one weighs 2,000 pounds,” Joan Tremaine said, shaking her head. “We stopped every 30 minutes to check the hubs to see if they were too hot. It was embarrassing.”

The gorillas were lifted into position with a crane, painted in fluorescent colors, and soon became a hot topic of conversation — both in the way Phil had intended, and in a way he hadn’t.

In the spring of 1998, because of complaints from other business owners, an ordinance was passed requiring all buildings in the city to be painted “soft, calm or subdued” colors. Phil fought the law and it eventually was repealed under a different administration in July 2002.

Minnie’s hot pink paint job was grandfathered in — she’d had it since before the 1998 ordinance was passed — and remained throughout the controversy. The smallest gorilla, named “Baby Mack,” however, changed colors from gray to lime green in 2006.

“When we first put them out there, the lady who owned the bed and breakfast up the street threw a fit. That made him more determined to keep them,” Joan said.

The early controversy eventually was forgotten, and the three gorillas became fixtures on South Washington Street. The gorillas are repainted every few years and now serve as a landmark for both locals and tourists, marking the place to turn to reach Vicksburg High School, City Pool and City Park.

“I didn’t put those gorillas there to make anybody mad. I did it to help my business,” Phil Tremaine said in a 2002 interview with The Vicksburg Post, just after the 1998 ordinance was repealed. “There may be a few people who don’t like the gorillas, but the majority do.”

His widow agreed. She said the gorillas not only bring in customers curious about them, but are a popular subject of photos for locals and tourists. Phil Tremaine died in 2013, but Minnie and her family remain as part of his legacy.

“He passed away, but his gorillas are still here,” Joan Tremaine said.