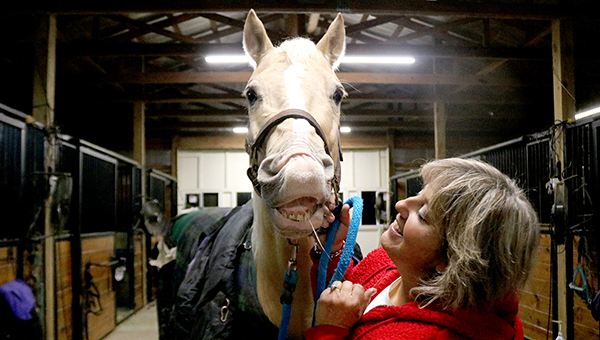 Leigh Ann Nosser has been using her love for horses to provide therapy through Rainbow Farms for 33 years.

Rainbow Farms was the first accredited therapeutic riding center in the state, according to Nosser. She has “most definitely” seen this form of therapy change people’s lives, mentally and physically.

“It takes that barrier down where they may have had a wall up — with kids who have been abused, animals and unconditional love. Anybody that wants to come. It’s a good place to be,” she said.

While Rainbow Farms is known for therapeutic riding, “anybody and everybody can come and take a lesson,” according to Nosser.

Her oldest client, Butch, is 84 years old, and she happily arrives each day with treats for all animals.

Nosser takes the extra time to teach each client how to safely take care of a horse.

In the 33 years Nosser has been in business, she has traveled all over the country for competitions, and she has collected a group of horses ranging in age from 15 to 36.

Of all the horses at Rainbow Farms, Peter Pan, a 15-year-old American Quarter Horse, is the most well-known, and famous for making “funny faces.”

Peter Pan is a therapy horse that has assisted a countless number of people throughout the years, but he has also had medical issues of his own.

Massey is the childhood best friend of Nosser and has been at Rainbow Farms since “day one.” She helps Nosser with the public relations aspect of the business, and has accompanied her friend on every competition she could attend over the years.

Massey was there through Peter Pan’s medical complications.

At one point, Peter Pan had to have surgery to remove a blockage in his nostril and throat caused by fungus. The blockage made it difficult for him to breathe.

Many clients have formed a special bond with Peter Pan, including a lady named Julie Faul.

Faul was diagnosed with ALS in her early 30s and lived with the disease for 14 years. She took weekly lessons from Rainbow Farms for two years.

She competed numerous times with Peter Pan. They referred to him as her “buddy.”

As Faul’s disease worsened, she was eventually unable to ride a horse and could no longer attend her lessons.

The staff of Rainbow Farms was not going to let her go without seeing her horse, so they brought Peter Pan to her home.

It seemed he recognized her, as he began nuzzling her without hesitation.

Faul passed away a year later, but pictures of her and Peter Pan hang in various places of the barn at Rainbow Farms.

Nosser knew this is what she wanted to do since she was a child, but never imagined the impact would be as great as it is. She now has clients who came as children passing that tradition on to their own kids.

“I have taught kids that are now married with kids of their own,” she said. “Their kids are coming here.”

Nosser has no doubts about the career path she chose.

“I’m exactly where I always wanted to be,” Nosser said.

Massey credits her friend’s selflessness for her success.

“That’s really true. What you give comes back to you. That’s how she is, and I think that’s why God’s blessed her like he has,” Massey said.