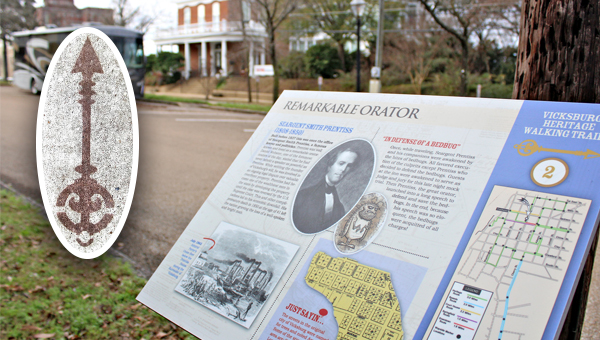 On sidewalks all over downtown Vicksburg lay the keys to the city — or, at least, the keys to a far deeper knowledge of the city.

“It’s an arrow that looks like a key,” Tim McCarley, who helped design the trail, said of the markers. “President Lincoln said we were the key to the South during the Civil War. Someone came up with the idea to play off of that.”

The trail was created in the mid-2010s under a partnership between the Vicksburg National Military Park, Vicksburg Convention and Visitors Bureau, Vicksburg Main Street, the city government and several other organizations. A grant from the National Park Service helped build it.

McCarley works in the city of Vicksburg’s public works department. He has a background in mapping, surveying and graphic arts, and thus was recruited by his bosses to lead the project.

The trail begins across from Washington Street Park at the corner of Washington and Grove streets and winds for three miles through Vicksburg’s downtown and historic neighborhoods. The primary trail, called the “Heritage Route,” covers three miles, and is supplemented by four shorter alternate routes — the Captain Speeds, Court House, Springfield and Downtown routes.

The Heritage Route includes 30 of the trail’s 35 markers, and the Captain Speeds Route that ventures down Cherry Street has five unique markers. The other routes are shorter and include portions of the Heritage Route.

“They wrote in the original grant that it had to be five trails. When they gave me the map it looked like they dropped spaghetti all over the map of Vicksburg,” McCarley said with a chuckle. “So I did one trail with four options.”

The trail markers have an interactive element as well, McCarley said. They contain a QR code that tourists can scan with their phones to pull up and save the markers and a map of the trail. The trail map is also available online at visitvicksburg.com/walking-trails, or at the trailhead on Washington Street.

“It really pushed the limits of what we could do technically at the time,” McCarley said.

McCarley added that he tried to go beyond the facts everyone knows about Vicksburg. He enlisted the help of local historians such as Gordon Cotton, Bubba Bolm, David Maggio, Bill Surratt, Morgan Gates and Jordan Rushing to dig deep for oddities and curiosities in addition to major landmarks.

“For example, Vicksburg was the first place shoes were ever put in a box. Another marker is about four famous women from Vicksburg. Those kinds of things,” McCarley said.

So the next time you see a key on the ground, stop, pull out your phone and scan. You just might wind up with your own key to the city.