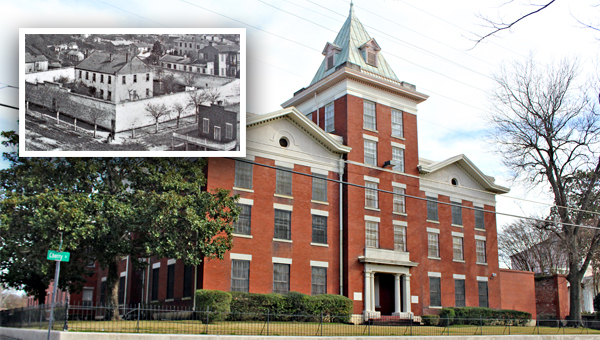 It sits on the corner of Cherry and Grove streets, a large red brick building with a tower at its southwest corner.

Completed in 1907 and enlarged 70 years later, the Warren County Jail is one of the city’s older buildings and only the county’s second jail, succeeding a facility that was built about 1825. Besides housing prisoners, the building serves as the administrative hub for the Warren County Sheriff’s Office and its different divisions.

But when it opened its doors in 1907, it had one purpose.

“When it was built in 1907 it was strictly the jail,” Sheriff Martin Pace said. “The sheriff’s office was across the street in the Old Court House. When the current courthouse was built, it moved into that building, and at the time the sheriff and the tax collector were in the same office; the sheriff was the tax collector.”

From a design standpoint, Pace said, the jail was modern in 1907 with unique features.

“You had a jailer’s quarters in the old jail and as late as the 1970s, you had one jailer on duty who would spend the night in the jail,” Pace said. “During the weekend you had a jailer who actually worked a 24-hour shift and slept or catnapped in the bed that was behind the radio room that was in the northwest corner of the building,” Pace said, adding the jailer was also responsible for handling the radio and would turn the volume up so he could hear the radio calls.

At the time, Pace said, the jail had two jailers — one in the morning and another at night.

When the addition was built in 1977, the interior of the old jail was gutted, the jailer’s quarters were removed and the area turned into a cellblock.

When the jail was built, its front entrance faced Cherry Street. The tower on the top of the jail’s southwest side held the gallows for executions.

“When that jail was built in 1907, the state law required that when a person was sentenced to death they had to be executed within the court district that passed that sentence,” Pace said. “That 1907 jail was built with an execution chamber by hanging.”

The tower had a “last night cell” where the condemned prisoner spent his last day, ate his last meal and spent his last moments with his family. The last execution at the jail was in 1939.

The gallows is now blocked behind a locked door, Pace said. He said the gallows has attracted requests from several ghost-hunting organizations wanting to go in the jail, but “I have never allowed it and will not allow it; I don’t think it’s appropriate.”

When the jail was remodeled, the inmates’ recreation area was made on the second floor as part of a compromise in a prisoners’ federal lawsuit because there was no place for an outside exercise area. Cellblocks were removed to make room for the area.

At 114 years old the jail is on its last leg and the Warren County Board of Supervisors has bought property to eventually build a new facility. Pace said he would like to see the old building preserved.

“My desire would be to allow the sheriff’s office and our administrative and investigative functions to remain in that building. That would include records, the investigators offices, my office and court services to all remain in the existing building,” he said.

“I would sincerely hope that nothing happens to the building itself.”